Oh, Margo! A single cutting remark from you sends my heart a-flutter more than any dopey six-week lead-up to Tommie getting to first base! And I’ve never loved you more than I do in today’s first panel. “Looking out for each other? Being loving and supportive in a family environment? That frankly strikes me as a lot of hassle. That’s why I alienate everyone who ever tries to love me — less work!” By panel three, Margo has adopted an expression of palpable scheming that’s equally hilarious. Many (including myself) have speculated that Margo will make Ruby her mule in her party-planning or art-displaying sweatshops, but now I think that our gal Magee is planning yet another career in the high-flying Manhattan service industry: she-pimp! “So, if Ruby was so happy to show affection to her family … for free … surely she’ll have no problem with showing affection … to strangers … for money!”

(Yes, I know that the English language already has in “madame” a perfectly serviceable word for a female who manages prostitutes. But I think the word “pimp” implies a certain callousness and propensity for violence that better suits Margo.)

Oh, Dr. Jeff, will you ever learn? You just got a response out of Mary that would allow you to extract some shred of dignity out of this conversation. Don’t push it. For the love of God, don’t push it. Mary’s comically exaggerated head-tilted finger-to-the-jawline contemplation pose is only going to end with her saying something blistering and humiliating.

I actually kind of like Anthony’s “Are you going home?” question, because it implies that maybe, somehow, I know this is crazy, but just possibly two FBOFW characters who aren’t married and who aren’t terrible, awful whores might have sex! Oh, who am I kidding, they were just going to sit on the couch and chastely smooch on the lips. And those lips would be closed. And little Francie acted as an agent of a vengeful, pleasure-hating God of Foob and prevented even that. But it’s Anthony and Elizabeth and I don’t want anything good to happen to them anyway so I don’t really care. 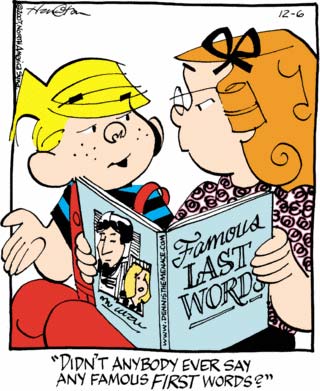 So, wait, Margaret has a book lying around that’s essentially all about death? Maybe there’s hope for her yet.

Man, you gotta feel bad for Count Weirdly. There are enough bizarre tchotchkes and strange animals in his lair to provide fodder for a scrambled word puzzle even if all he was doing was sitting around minding his own business and reading Famous Creeps. Instead, here comes Slylock and Max and some angry heron or something busting in to ruin his quiet evening with more wild accusations. Since there’s no mystery to solve, his crime is probably much more straightforward than usual — like, maybe he just exposed himself to her down at the park or something.

NEWSFLASH: COMICS CURMUDGEON CHUCKLES AT GARFIELD, QUESTIONS HIS WHOLE CONCEPT OF HOW THE UNIVERSE WORKS