Sadly, rules about depicting animal violence prevent us from seeing the bloody glory of this little-dog-on-littler-dog battle, but it’s obvious that Chester won, since his Margo Magee lookalike owner had to fish him out of the fighting pit. The motion lines in panel one also make it look like Mary just backhanded her nemesis in the back of the head for good measure. But for my money the greatest thing about this comic is the wordless exclamation point Mary is emitting in the second panel. It’s clear that nobody has told Mary that anything was her fault, ever. Watch out, fur-collared-coat lady! Mary got a bunch of her friends together to help her talk a guy into suicide once, and his crimes were clearly nothing compared to you attempting to cast blame on the Queen of Charterstone. 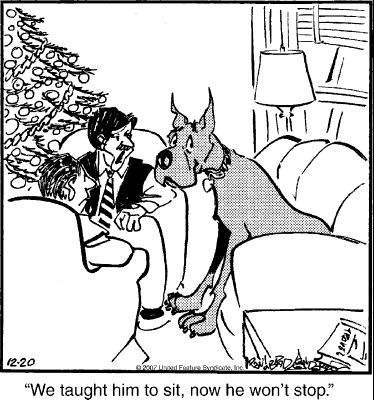 Marmaduke’s troubling slide into insanity accelerates. Never mind the fact that if Marmaduke wasn’t sitting, he’d just be running around and destroying things, and possibly humping his owner’s hapless guest; his sitting would probably be less intrusive if the various pieces of furniture in the living room were, you know, more than eight inches apart.

I’m always kind of interested in the flashback scenes in Crankshaft. This woman is (if I have the family relationships right, which I’m still not 100 percent sure that I do) the ’Shaft’s daughter, so it’s intriguing to see the man’s family when he was younger and maybe not so cranky and HOLY GOD WHAT ON EARTH IS THAT THING IN FRONT OF THE LITTLE GIRL’S FACE IN THE THIRD PANEL WHERE THE HELL IS HER MOM SHOPPING FOR ORNAMENTS HOLY CRAP!