Check out Toni’s right hand. Anything weird about it? A little off? No? How about the fact that it appears to be almost two-thirds as long as the whole rest of her arm? I know she’s a cartoon character with, for instance, weird beady little eyes and an impossibly large mouth, but there’s something about her hand that’s creeping me out. Urrrgggh.

I can’t believe I’m saying this, but I really hope Brad and Toni are overcome by the festiveness of their costumes and end up playing “bad Santa and naughty elf.” Not because I want to see or even imagine their erotic congress, mind you, but I just want it over with. Please. The sexual tension between these two is not hot. It’s soooo very un-hot and queasy-making, and the inhumanly large hand ISN’T HELPING. Just do it already, you two, because it will be terrible and awkward and you’ll never do it again and then we can all rest easy.

The sad thing is that the six weeks of Google searches to which we’re about be treated are actually preferable to the alternative, which is of course six weeks of Peter Parker whining at the TV. At least Spider-Man will actually be doing something, even if it’s just typing. I love the way the flat-screen monitor is dramatically foregrounded in the final panel, as if to say, “Here, dear reader! Here is the true hero of this strip! Behold, the Internet!”

Remember, everyone, you don’t need to spend big money on tickets to Stomp! You can just recreate it in your own home! Also, children as young as eighteen months can be trained to make margaritas. 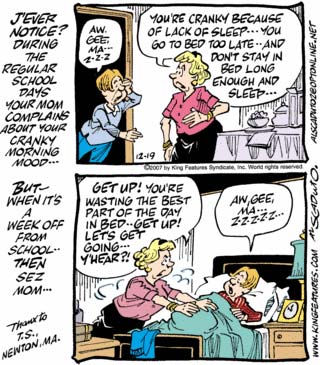 I have a note in my calendar that today’s TDIET is from faithful reader Tili; if so, stand up and take a bow! I am in full solidarity with you, my night owl brother or sister. The Man tells you that you should get up early and go to bed early, but without late night toiling where would we be? This blog would be short quite a few posts, I’ll tell you that much. 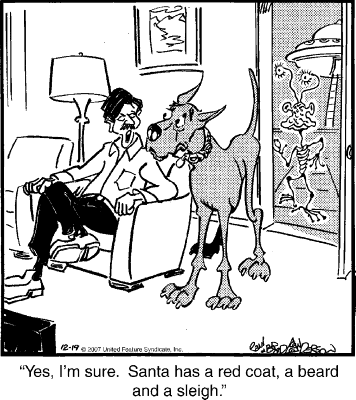 Do you ever get the feeling that the creator of Marmaduke is just totally bonkers? Well, today’s comic is not going to disabuse you of that notion.

Hey, remember when I speculated on a Sally Forth-Shortpacked crossover? Behold my power over the world of cartooning!