I’m not sure what I would have expected Margo’s reaction to a simple, open-hearted gesture of human kindness to have been, but “recoiling in horror” seems about right. I do sort of wonder why she thinks running a chain of hair salons qualifies someone to plan a wedding, but she is desperate. And not a particularly good event planner. Maybe she just takes Ruby’s business prowess as evidence that she’s not a mouth-breathing submoron like her cousin Lu Ann.

Weighing against Ruby’s intelligence, of course, is the fact that she keeps calling Margo “Maggie”. At first I thought she just actually didn’t know A3G’s feistiest roommate’s name, but I’m beginning to think that she believes that “Maggie” is an acceptable nickname for anyone whose name starts with “M” and then has a “G” in there somewhere. (Note: It isn’t.)

This little expedition in school spirit-based vandalism cannot end well. I’m going to bet that the current governor of whatever benighted state Milford is in ran on an “I’m even tougher on crime than the other guy who’s tough on crime” platform, resulting in a “two strikes and you’re out” rule on the state lawbooks. Thus, once Cully is caught red-handed in an act of senseless spirit rock desecration, he’ll be sent to the big house for 25 years. There, as he whiles the decades away lifting weights, only one thought will be on his mind: “MUST. KILL. ONE-LEGGED BILL. (OR WHOEVER THAT IT IS IN THE CAR. I’M PRETTY SURE IT’S BILL THOUGH.)” Somewhere in the year 2034, Bill Ritter will be leaping about on whatever advanced cybernetic limbs are available then, only to come face to face with Cully, hell-bent on revenge!

“Hmm, I’ve been doing this strip for 37 years, and I’ve constantly harped on the fact that Momma is unnaturally jealous of her daughter-in-law. But how can I make this so vilely obvious that everyone gets a full sense of this feature’s Oedipal horror?” 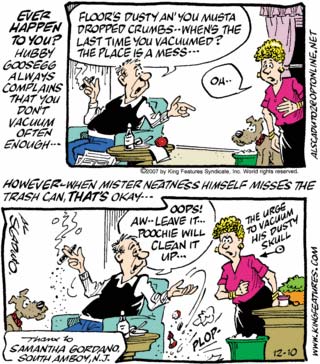 Our long good-bye to Al Scaduto begins today with this entry from “Samantha Gordano,” who is also faithful Comics Curmudgeon reader mako. “Of course I wrote in talking about [my husband’s] inability to find the trash can for juice containers,” she says, “but Mr. Scaduto must have known about his propensity for letting the dog clean it up as well.” She says she’d like to dedicate this strip to his honor. What I want to know is, does she want to vacuum his skull on the inside or the outside?