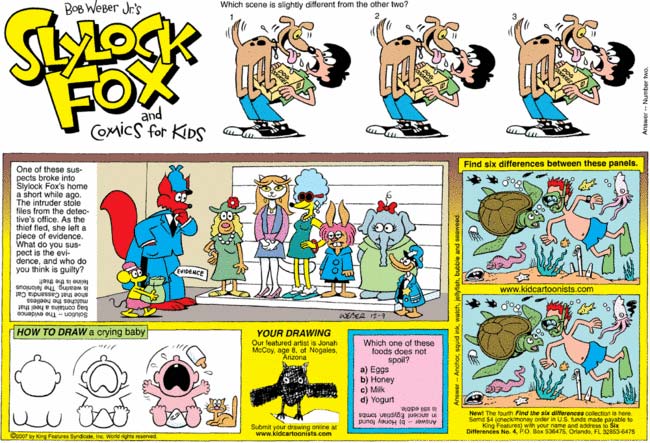 Oh, Cassandra! Your attempts to snare Slylock’s heart grow ever more transparent — and ever more pathetic. “Accidentally” leaving the heel of your shoe behind? Come on. Staring brightly ahead as you wear that prim little pastel outfit isn’t going to fool anyone.

Getting a lineup together in world shared by many kinds of sentient animal life isn’t easy, but the crew assembled by Officer Duck today is particularly motley. The two creatures of indeterminate species on either side of Cassandra look like they’re hoping that this will be their big chance to break into movies, or at least reality TV. If I were Slylock, I’d start looking into the background of the elephant lady at the far right — she looks guilty as hell, and presumably has got some kind of home counterfeiting business or meth lab set up back at her trailer. The pink-haired bunny, meanwhile, is way, way too stoned to care.

(If you wish Cassandra would “steal some files” from your “office”, you obviously need some Bob Weber Jr.-designed Cassandra Cat gear from the Comics Curmudgeon store!)

You might chalk this up as a garden-variety generation gap comic, but with young chinbeard and his sister watching their parents turn into their grandparents and worrying about turning into their parents in turn. But recall that the grandparents in question are rageaholic Crankshaft and the somehow even more loathsome Ukrainian hate machine. The kids probably thought that they’d at last be free once their grandparents kick off, but now are worried about enduring their post-transformation parents. Junior is right to look so terrified. 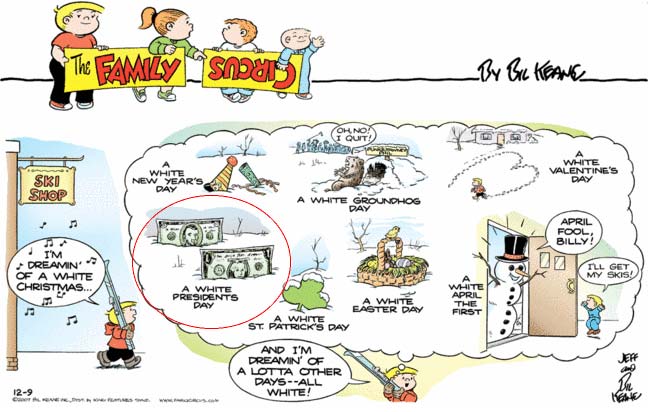 Note the bit that I’ve highlighted. Billy is clearly in the “Anyone but Obama” camp for the 2008 elections.

(Yes, I know there’s a neo-swing scene that’s alive and well today in New York and elsewhere — but the kids today out doing the Lindy Hop tend to be young hipsters like these. Tommie and Gary are soooo very much not hipsters; and I don’t care how old they’re supposed to be, I refuse to even qualify them as “young”.)

It’s not like I’m in love with the word “barmaid”, exactly; I just think “bartenderness” sounds kind of creepy. “Come on, baby, I’ve been lookin’ at you all night; show me a little bartenderness.”

Site meta-note: I’ve decided that I’m going to start doing the comment of the week/ad love posts on Monday instead of Sundays. I often don’t even get to Saturday’s comics until Sunday, and doing the Sunday strips takes me longer than usual because I can’t easily see them all at once on the Chronicle site, so often doing blog work eats up a good chunk of what oughtta be a weekend day of rest and relaxation! So, Trilobite’s comment gets an extra day of glory thanks to the shift.