Whenever anyone, usually a woman, in a comic strip, or some other narratively undemanding medium, declares, “I want to talk about us,” it only leads to one place: disputes, anger, tears, madness, and broken lives. The marriage of Cathy and Irving, solemnized in February of 2005, is thus almost certainly on its way out. Will Cathy become more readable (or, really, readable at all) if Cathy is ACK-ing not to her accountant, but to her divorce attorney? Will Irving’s bug-eyed manias be more acceptable if they involve an obsessive catalog of all the gadgets that he brought to the marriage that should by right be his after the divorce? Will I be able to derive sick pleasure from week after week of their bitter, heart-rending, and expensive court proceedings? Will Cathy finally be forced to testify, under oath and before a judge, about why exactly she doesn’t have a nose?

It’s not clear whether Blaze is actually paying to have his super-cool New Year’s bash catered by Magee Dangerous Emotional Mood Swing Event Planning LLC and Ruby is filling in so that Margo and Eric can have sex, or if he’s just conned Ruby, his sister/cousin/whatever (I believe where they’re from it just all falls under “kin”) into cooking for nothing so he can mingle with the hepcats. On the one hand, Blaze’s last professional dealing with Margo came several years ago, when she was a wildly unqualified publicist rather than a wildly unqualified event planner; he hired her to promote his play and she, like, forgot or something, so you’d think he’d be wary of throwing more money her way. On the other hand, there are some pink, green, and yellow balloons in the living room, and that’s just the sort of half-assed and aesthetically misguided touch we’ve come to expect from Margo’s crack team.

That plate of whole, unskinned potatoes sure looks to be piping hot! Thankfully, Ruby can just set it down on the bottom of panel two.

I don’t really have a lot of dealings with teenagers — they made me anxious when I was a teenager, and I haven’t really seen anything since that’s made me change my mind about them — but the idea of Andrew Gregory desperately texting his ex-girlfriend to boast about his athletic achievements strikes me as a slightly more accurate depiction of the emotional contours of high school life than most things that happen in this strip. Not accurate, however, is the way Andrew’s Vulcan ex is holding her phone in the last panel. It’s like there was pre-existing drawing of her holding a dead fish, and it was reused with just a little redrawing. 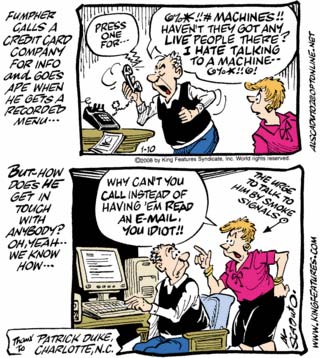 Say, if my records are right, “Patrick Duke” is none other than faithful reader captainswift! Congrats to you, Patrick — but did you send this one to Al by e-mail or real letter? Or by smoke signals?