Say what you will about Cousin Blaze’s ludicrous yet omnipresent cowboy outfits, but at least they make it possible to differentiate him from every other same-general-age-as-the-A3G-girls-whatever-that’s-supposed-to-be-exactly dude in the strip. Despite the fact that Blaze is identified in the first panel narration box, the comic is so dependent on the western wear to mark him out out that here we get his casual indoor cowboy look — no hat or jacket, but still the shirt and bolo tie, plus hair that looks like he was wearing a cowboy hat mere moments ago. I love the little arrow things on his shirt; I know it’s a feeble attempt to represent cowboy stylings, but in panel three in particular it looks like it’s just pointing at his bolo tie, as if to say, “Can you believe he’s wearing this thing? I know!”

I suppose I should be bothered by the entire headache-inducing ill-drawn cubist nightmare in the third panel of this strip, but it’s Archie, so I can’t get too worked up. For some reason I can’t really stop thinking about the guitar, though. Why is it there? Is it Archie’s? Did he bring it over to serenade Veronica, to accompany the presentation of his tiny and oddly nonspecified gift, and then just lose interest when he was distracted by the Car Channel? And what’s all that stuff around the guitar neck — broken and tangled guitar strings, or a plant of some sort growing directly out of the wall of stately Lodge Manor?

I mean, I’m glad and all that wacky radiology lab mixups are saving people’s lives rather than cruelly snuffing them out as in Funky Winkerbean, but come the hell on. It would be one thing if Luke Wilson’s X-rays had been mixed up with those of, say, Hollywood actor Luke Wilson, but do doctors really take a casual look at X-rays and say, “Whoops, looks like he isn’t terminal after all. Ha ha! I guess I was looking at it upside down! I don’t even think that’s a tumor — it’s probably his hypothalamus or some other whatsit. Maybe I should call him, right after I get back from golf.” 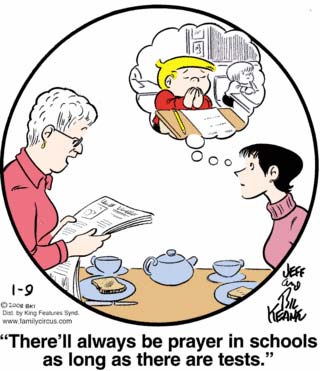 Notice that in mom’s little fantasy, Billy is the only one praying. Is it because she believes that the Keane Kompound is the last bastion of piety in a fallen world of secular humanism? Or does she just know that Billy’s the dumbest kid in his class?