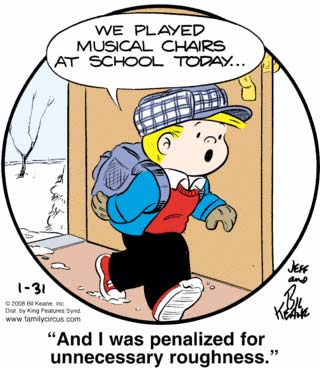 So you’re telling me that Billy’s day at school consisted of him wildly swinging chairs around as teachers and school administrators swarmed on him, desperately trying to calm him, and you’re showing us the moment hours later when he just strolls into the house? You’re telling me that his classroom was a scene of carnage, with broken noses and black eyes and many tears, and you spent your energy drawing the bits of snow clinging to Billy’s sneakers? You’re telling me that he spent the afternoon with a school psychiatrist, desperately trying to figure out just what motivates this ticking time bomb, and you’re giving us a little mixed-games gag? Well screw you, Family Circus, for ruining all my good times. 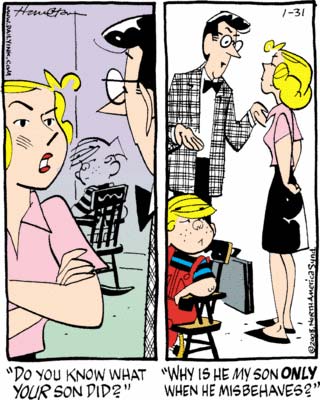 This joke has been brought to the present by an experimental time travel device from the year 1952!

I don’t really feel a need to go into today’s Pluggers joke — like so many others, it boils down to “pluggers are old” — but it’s worth noting that it was submitted by “Tom Furrh.” Do you think that with Tom’s last name he found himself strangely drawn to read and submit to the Pluggers strip? I’m surprised there weren’t more TDIET entries from people named things like “Bob Gripe” or “Sally Misplacedrage.”