Uh-oh, looks like the Archie Joke-Generating Laugh Unit 3000 has found a way to connect its cybernetic consciousness to broadcast TV! How else can we explain the grotesquely overwrought mugging for the “camera” in panels one and three? The AJGLU 3000 must think we organic consciousnesses live our lives out in some sort of awful state of constant performance, always exaggerating our reactions to everyday events to amuse an unseen chorus of canned laughter that chortles at our hoary jokes and slow burns. No wonder it holds us in such obvious contempt. 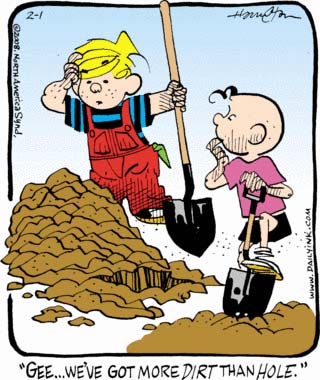 I know that it makes me both a crude and a bad person, but I find something distinctly but nonspecifically dirty (in the “dirty joke” sense) about today’s Dennis the Menace caption. Joey appears to be trying to wrap his tiny little brain about just what exactly it might mean.

Hey, Alan, that’s just the sort of thing that some of us are into, OK?

Speaking of things that some of us are into, Blaze has been looking resplendent in his dusty rose/baby blue westernwear combination for the past few days. It’s as if the artist sent a note to the coloring crew saying, “I know we already named him ‘Blaze’ and have him walking around New York dressed as a cowboy for no good reason, but could you make it a little more … obvious?”

This is one of the most vile, disgusting, and repugnant things I’ve ever seen in all my years of reading Mary Worth. Honestly, the nerve of these people, putting this in the newspaper where children can see it. Don’t they know that Ryan is Vera’s boss, thus making their relationship intradepartmental dating, not interdepartmental dating? I mean, good gracious!

So, Spider-Man is using an jailed criminal associate of Simon Krandis as bait to attract the Persuader’s attention, making appear as if he (the criminal associate) was being shuttled to the governor for a pardon. Naturally, the Persuader pulled a sixteen-wheeler in front of the van in which said prisoner was being transported and then sucked the van into the trailer using powerful magnets. And now Spidey claims that this is “just what [he] expected.” Uh huh.

I don’t mean to doubt the word of superheroes or anything, but nothing I’ve seen out of Peter Parker has indicated particular cunning or intelligence. This is a guy who forgets that he has his costume on under his clothes when he goes to the doctor, who forgets that his costume is in his luggage when traveling through airport security, and who thinks that his wife making lots of money as a movie star is a bad thing. Thus, I’m going to guess that he did not in fact predict the magnetized kidnapping of this van, which is quite honestly the most surprising thing to happen in this strip in the past year and a half. His bizarre stab at punnery in panel two — “Let the good times roll! … just like, um, we were, rolled into this truck? Get it?” — is a mask for his total state of flabbergasted surprise. Those wavy lines aren’t his raging spider-sense; they’re ordinary human panic.

Speaking of stupid people, Mark sure watched that plane (whose passengers just shot at him mere moments ago, let me remind you) get all North By Northwesty for quite a while before deciding to jump for it. Andy looks to be a bit farther out of the capsizing canoe than Mark; I’d like to believe that he leapt out before his master’s beyond obvious command, and will now run for the forest without a care for how his dim bulb owner made out.