And so the Tale of How Sam Came This Close To Having Sex With His Wife ends in unconsciousness. It’s likely that Abbey’s narcotic-fueled mania has finally and abruptly dissipated, though we can’t rule out the possibility that the mere thought of carnal relations with her husband simply bored her so much that she passed out. This strip is notable for its Extra Gratuitousness Action: Not only is Abbey sporting what may be the most form-fitting robe ever worn by someone who hasn’t been hosed down in preparation for a Maxim photo shoot, but Sam Driver is is also showing off the sort of ripped bod that only a grueling, desk-bound legal career with occasional travel for business purposes can produce. You know, I used to take my shirt off pretty much like that because I liked to pretend that I was a superhero changing into my costume. I was eight at the time. I’m not sure what Sam’s excuse is.

I’m going to continue with my tradition of questioning how sincere Sam and Abbey’s desire to screw is by pointing out that they own a compound so extensive that it requires a team of servants to manage properly; thus, I don’t buy the whole “we never get a chance to have sex because we never have the place to ourselves” excuse. The wing where the kids live is probably further away from their bedroom than my local grocery store is from mine.

I feel compelled to point out Abbey’s blacked-out face in panel one. I’m sure it’s a product of the infelicitous meeting of color and black-and-white that afflict all the online King Features strips, but it honestly gives me the creeps. 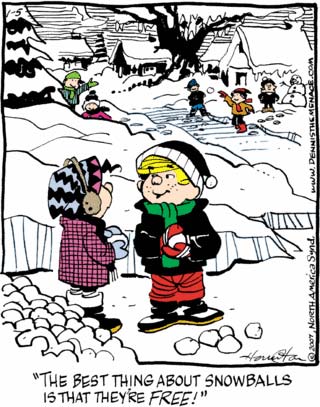 How to be menacing: Another installment in an occasional series

Sometimes a strip as been around for years and years and you think you’ve got a handle on it, but suddenly it manages to surprise you — or, in this case, surprise and horrify. Why has Ziggy abandoned its usual aesthetic of outline drawings and tons of white space and decided to confront us with every greasy, curly hair on the forearms and neck of this belligerent restaurateur? To say nothing of the blemishes on his nose that could be either pimples (the result of 12-hour days spent being splattered with hot grease from his filthy grill) or burst blood vessels (the product of a combination of alcoholism and constant rage)? This must remain forever a creative mystery from the whimsical world of the funny pages.

Pluggers are unable to save adequately for retirement, and will thus spend most of their waking hours engaged in soul-crushing menial work until the day they drop dead.