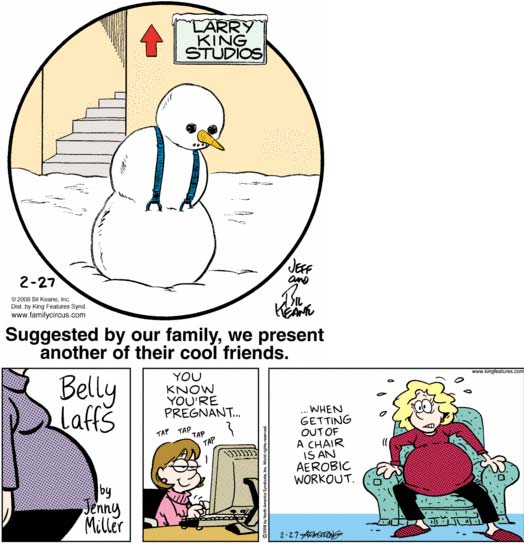 Of today’s entries, I find the Family Circus more baffling and disturbing. It seems fairly unlikely that any normal child — or even a Keane Kid — would have the slightest interest in CNN’s resident deranged, babbling 97-year-old talk show host, or even the vaguest idea as to who he is. There’s also something unsettling about the sight of anyone — even a snowman — wearing suspenders but no pants; in particular, the fact that they seem to be affixed to his naked hips implies some kind of kinky piercing situation that believe me, you don’t want to contemplate really at all but especially in terms of Larry King.

“You know what else is expanding rather aggressively? The angle of my legs! Check out Funky’s Winkerbean, baby. You know you want it.”

By coincidence, Margo’s dialog in panel three is also pretty much the sum total of her foreplay techniques.