“So, how come you’re named Funky Winkerbean and not something non-giggle-inducing?”

You know, if I were the writer from Pizza and Calzone Restaurateur Monthly, I’d be less concerned with Funky’s branding strategy and more with his inhumanly broad smirk, which is splitting his cheek most of the way to his ear. He appears to be preparing to tip the top of his head back completely like a Pez dispenser so that he can cram the reporter lady and the photographer down his esophagus in a single gulp.

Reporter lady might be forgiven for assuming that “Montoni” is a whimsical mascot like Uncle Ben or Bob’s Big Boy and not an actual person who once dished out pizza and wisecracks from behind the counter. I believe that it’s been mentioned in passing post-time-jump that he’s retired to Florida someplace. Since this is Funky Winkerbean, he’s presumably living out the end of his life in a cut-rate, urine-scented nursing home, desperately lonely and wondering why none of his former employees or neighbors whose social lives revolved around his restaurant ever come to visit.

And now the circle of meddling is … complete. “Drew, your father flew to Vietnam and did some very rewarding work there until it almost killed him and I made him come home! Why don’t you follow in his footsteps? Except in your case, you’ll be dying alone, since we’ve already established that nobody loves you enough to come and rescue you!”

I’m pretty sure that today’s Momma is about bird-fucking. I was trying to come up with something funny to say about it, but then I decided it pretty much stands on its own. 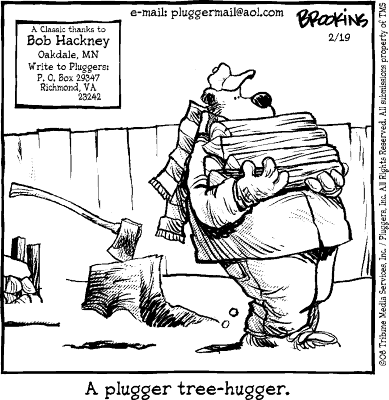 A plugger cares about our natural environment only to the extent that he can chop it up and set it on fire.