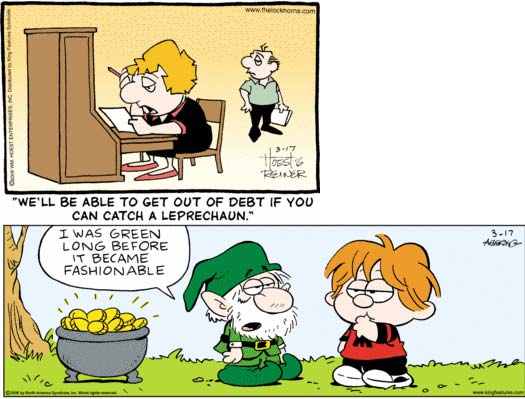 Usually, St. Patrick’s Day is considered a festive occasion, a celebration of Irish heritage, the extermination of paganism, and binge drinking. But two cartoons dared to use the day to explore the holiday’s darker side. For instance, what’s the origin of the myth of the leprechaun? Folklore experts will tell you that they’re the memory of the gods the Irish worshiped before St. Patrick came and made them all Christians, but the Lockhorns seems to indicate that perhaps their supposed gold-hoarding ways are a product of pure desperation. Loretta, staring glumly at the small piece of paper that says so much about financial ruin and public shame and prison, is so desperate for a way out that she latches onto the idea of tiny, imaginary spirit beings that can solve all their problems. Leroy, just as glum but still in touch with reality, can only look on in pained silence.

Meanwhile, an unimpressed Marvin has actually encountered one of the little Celtic sprites in the flesh, and boy, is he ever failing to live up to their reputation as adorable, happy-go-lucky creatures. His elfin visage instead tells a tale of depression and despair. I’m not sure if he never emotionally recovered from watching thousands of his countrymen die during the Hunger, while he, immortal and half-forgotten, could do nothing, or if he was interned for years without trial at Long Kesh by the Brits as a suspected IRA man, but he looks like he’s about to slit his tiny, pixie-like wrists.

Man, it’s too bad that goth kids don’t as a rule read Dick Tracy, because “So you think I’m ugly? What’s really ugly is you for not knowing the world is spinning into degradation” would make a sweet yearbook quote.

I’m pretty sure that Momma and her friend are having a thinly veiled discussion about their sons’ penises.