Yesterday, several commentors noted that Marvin and Bitsy (yes, Marvin’s dumb dog is named “Bitsy”) were conversing not with their usual thought-balloon-based psychic powers, but in ordinary word balloons denoting normal audible speech — or as normal as any such speech can be when being uttered by a baby and a dog. Naturally, because this is Marvin, I assumed that it was a result of the strip’s general slapdash halfassery, rather than than some momentous change in the inner universe of the characters. But today, we see that Marvin can in fact speak aloud to adults in complete (and rather pompously phrased) sentences. Why? Who knows? Who cares? It’s Marvin. At least they’ve quietly dropped the stupid text speak.

Gosh, Liz, I wonder why it doesn’t feel quite right? Maybe because this whole process has involved you letting go of your own hopes, dreams, ambitions, wants, and personality, and now are just being buffeted along by everyone else’s opinions? Or maybe you’re talking about the dress itself, with its built-in whalebone corset, which feels very much not right as it jabs into your ribs.

Hey, everyone, would you like to get ready for taco casserole at home? It’s easy! Here’s how: 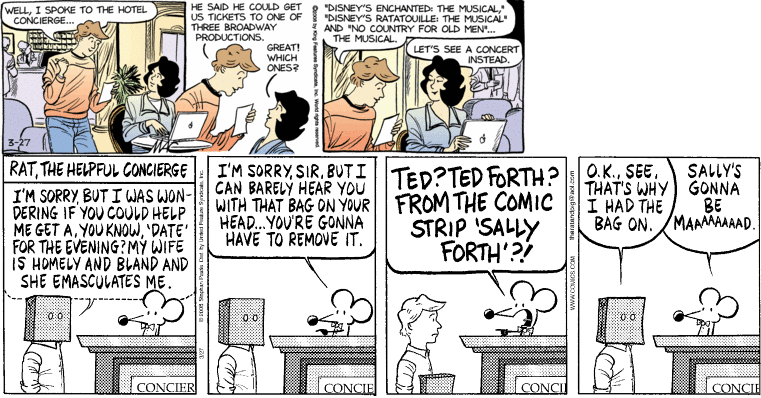 Hey everyone, it’s a Sally Forth-Pearls Before Swine crossover! There’s very little I can say that would be funnier than Sally Forth writer Ces Marciuliano’s original blog post on the subject, so you should just go check that out now.