Hey, kids, welcome to Judge Parker, where nothing ever happens for months and months and months, but when it happens, it really happens! A sexy (admittedly, we can’t see her face, but this being Judge Parker, “sexy” is a good bet) lady terrorist hell-bent on revenge! A cancer-ridden old lady in a wheelchair transformed into an unwilling human bomb! A battle royal between an enraged woman and an ex-Navy SEAL with no legs! Enjoy your next several days of thrilling action before we get back to the boring. In panel two, Momma Steve’s creepy, flesh-colored gag makes her look like some kind of mouthless horror, which hopefully indicates that the denouement of this story will be as deviant as the one in this strip’s pervy trip to France.

I’m sort of charmed by the phrase “marked-down polyester from Wal-Mart,” which implies that you can go into the world’s largest retailer and buy great bolts of cloth to take home to your wife, who will sew them into the clothes for you and your children. It reads like it’s been written by someone who’s heard second-hand about developments in retail since the 19th century, but has never actually been in a store per se.

Update: Uh, apparently you can buy fabric at Wal-Mart with which to make your own clothes, like they did in olden days. Ha ha! Josh is a moron! 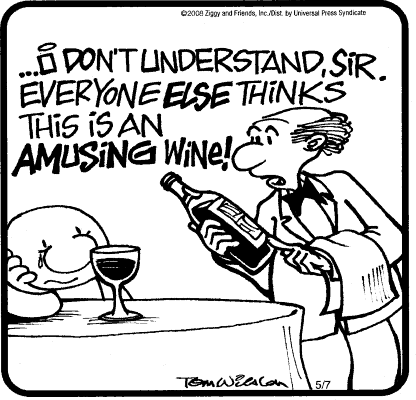 Ziggy is so sad and lonely that he’s turned to the bottle; but, far from forgetting his problems, in his drunken state he’s become even more maudlin, and is now just sitting at the table by himself weeping openly. The waiter, profoundly unsettled by the raw emotional pain on display, covers up his discomfort by cracking wise.