Thank goodness Herb and Jamaal is at last casting its penetrating eye on our political process, using its typical rhetorical strategy of making sure that nobody and nothing is mentioned by name, or with any identifying features of any kind. “CANDIDATES MAKE NEW PROMISES!” Heavens to murgatroid! What won’t these slimy politicians do to achieve elected office of some sort? They probably also “EXPLAIN POLICIES” and “ATTACK OPPONENTS!” They’d better watch out, though, because they might get “EMBROILED IN SCANDAL” or “QUESTIONED ON CONTROVERSY!”

Actually, you know what? That’s pretty much how most of political coverage in the newspaper really goes. Now I’m depressed. 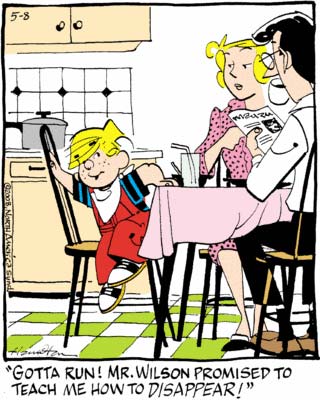 So, will Dennis “disappear” in the sense of “sold to some shady Albanian businessmen and end up cleaning toilets in a mansion in Dubai?” Or in the sense of “entombed in concrete and dumped into the resevoir?” Alice’s face seems to indicate a certain detached curiosity, but little else.

I’m not sure what the little dots in front of Francis’s half-crossed eyes in panel two are supposed to represent, but I think Momma may have just punched him in the face.