It’s good to see that, even after the sexification of the formerly dorky and prepubescent Sophie, there’s still one constant in her personality: the obvious intelligence gap between her and her parents, and the sense of disgust it instills in her. I love her look of sneering contempt in the second panel. “Jeez, my mother, the accidental dope fiend. LOOO-SER!”

Thank God World War II is over; if every movie depicting that conflict I’ve ever seen is accurate, at some point Killer would have gotten separated from his unit (presumably after sneaking off to romance some French ladies, or perhaps some French trees). Making his way back to American lines, he would have been confronted by unfamiliar infantrymen who would have demanded that he prove his Yankee status by the one surefire method available: by naming the winners of the past few World Series. The part of his brain normally dedicated to sports trivia having been long been redeployed to work on the arts of seduction, he’d be unable to answer, and would no doubt be summarily executed as a Nazi spy. 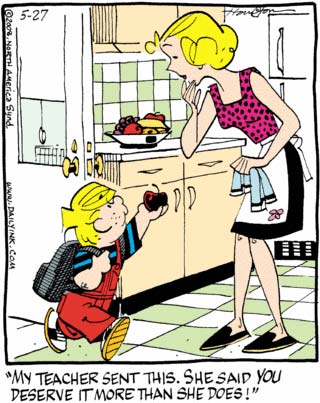 That apple is poisoned, obviously.