I know we’re supposed to be outraged on behalf of the Trail household at Kelly’s big-city sneering, but you have to admit that the scene is kind of rustic, and the hosts aren’t exactly up on what constitutes hospitality, if panel three is any indication. “Lunchtime, everyone! Here’s a big bowl of ice! Go on, eat up, I’ll make more!” On the other hand, the ice may have been requested by Kelly and Roger for their movie, possibly for genital-cooling purposes. 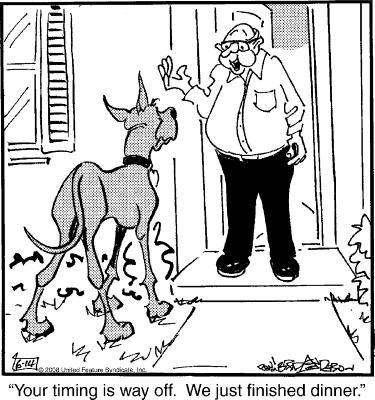 Hey there Baldy McNeighbor, you look pretty smug for someone who’s about to be devoured by an enormous, hungry dog.

You mean everyone who comes is going to get really high and end up encrusted with filth? If only, kids.

You’re a plugger if nearly everybody you grew up with is dead.