Don’t get me wrong, a two-week Sicilian vacation is pretty awesome. There’s nothing like opening up the window in the morning and looking down the hillside to the Mediterranean below, knowing that in a few minutes you’ll be splashing in its delightful blue waters. But then, there’s also nothing like getting up in the morning and seeing the total insanity that is Gil Thorp, so I can’t stay on vacation forever. I suppose that’s supposed to be Bugs McCoy standing on the dock there, but it looks more like some escapee from a nightmarish genetic research lab, its unformed potato-like head glistening facelessly in the morning sun. Then there’s panel two, in which Elmer proves that “average high school arm” is some sort of code for “disproportionally and hideously plump sausage-thing.” Upon deportation Elmer will be trapped in legal limbo at the border, since Mexico will refuse entry to this obviously dangerous mutant. 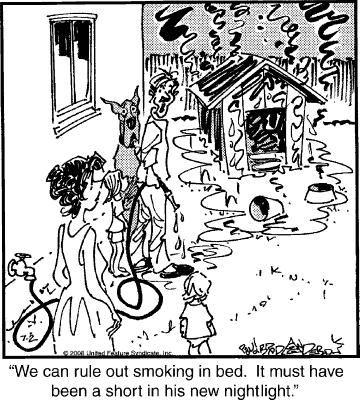 Given that Marmaduke can wear clothes, write English words, order bones over the Internet or possibly by phone, and, um, smoke cigars, I’m not actually convinced that we can rule out smoking in bed. I do admit that it seems more likely that some terrified citizen, tired of Marmaduke’s rule of slobbering canine terror over this hapless suburban community, has attempted to burn him to death while he slept.

That’s pretty big talk coming from someone who appears to be wearing a hand-torn burlap sack. To say nothing of those damn potato-feet.