Now that Mary’s been dumped, she’s taken off the alluring maroon one-piece belted number she was wearing as part of her seduction strategy, and changed into her lounging clothes, which apparently consist of t-shirts she scrounged from the “Lost and Found” box down at the cruise ship terminal in 1985. The shirt’s unnatural inky blackness should easily mask any butter stains as our jilted biddy eats her seafood scampi with her hands right out of the microwaveable plastic tray while standing over the sink. But will the hot pink island scene be dulled by her tears?

I don’t really talk about Cleats very often, because it resides in that netherworld of “generally not interesting enough to make fun of on my blog, but not actively offensive enough for me to go through the trouble of removing it from my Chronicle custom comics page.” This week’s strips have consisted of typical dull-ish whimsy, about a soccer ball that’s getting a little too warm after being left out on the sunny field during half time — until today, when we’re presented with the horrific image of an inanimate object somehow imbued not just with the power of thought, but also with the biological urges to eat and drink, and yet lacking any of the anatomical equipment needed to meet those needs. I can think of no crueler punishment that a sadistic creator could dish out.

Alan is turning out to be an even more delightfully incompetent drug dealer than any of us could have hoped. Over the past few weeks, he’s repeatedly violated such well-established Drug Dealer Rules as “Don’t smoke your product,” “Don’t smoke your product with your customers,” “Don’t use your straight job as a drug-dealing den,” and “Don’t let your crackhead customers hang around your straight job smoking crack when there’s a perfectly good alley out back.”

Ray, meanwhile, is showing the lethargic semi-consciousness that’s all too typical of users of depressant drugs like crack cocaine. However, even in Ray’s crack-numbed state, faithful reader Shandyowl recognizes something in the young man: himself. “I have been joking with my friends that Alan using his paycheck to buy some sort of generic non-specific narcotic is based on me and today I find that I am guesting in the strip!” Behold the uncanny resemblance: 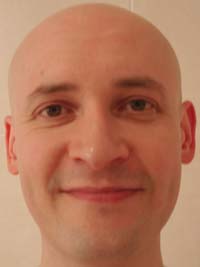 “If only I were at home — I would have access to pictures where I am
actually wearing a yellow t-shirt, darn it!” he says.