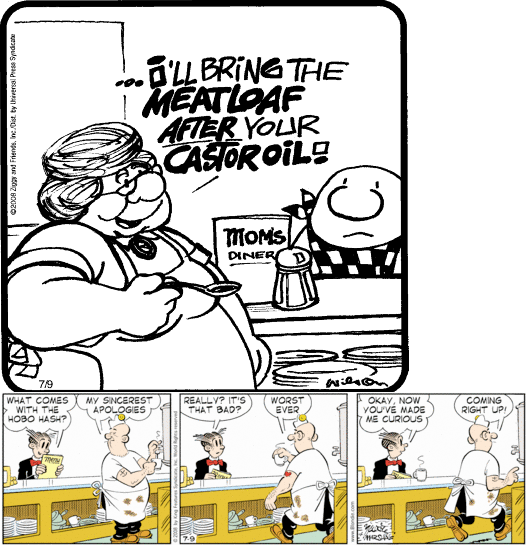 I’m not sure which of these two diner-themed comics is more unsettling. Most of the kids today are wholly unfamiliar with castor oil, except as an abstract thing that characters in classic Warner Brothers cartoon are comically terrified of having forced upon them, so let me be the first to tell you that it’s a laxative. Is “Mom” implying that her meatloaf is essentially an enormous colon plug, and that Ziggy’s GI tract thus needs to be prepared if he wants to survive the experience of eating it? Or is she just maternally handing out folk remedies that don’t meet FDA approval to total strangers, seeing as her children have cut off contact with her as a result of their emotionally-scarring diarrhea-plagued childhood?

An even more sinister possibility: in fascist Italy, paramilitaries would often force-feed castor oil to political dissidents as a means of intimidation, so it’s possible that Mom is a war criminal on the run.

Blondie is somewhat more straightforward, as amoral food addict Dagwood looks eager to devour the hashed up remains of some poor hobo.

See how easy it is to break up with someone when you don’t know how to feel? Dr. Jeff “Emo” Corey, take note.