Let’s forget, for a moment, General Halftrack’s terrible problem with alcohol. Is it standard operating procedure at American military bases for the assembled troops to file by, band playing, while the commanding officer and his adjunct stare grimly down from a raised dais? This to me evokes not so much “America’s all-volunteer military” as “Moscow, circa 1982.” Actually, that does explain a lot about Halftrack’s ashen pallor, and his terrible problem with alcohol.

Possible jobs for TJ that would justify his current outfit:

Have the DeGroots considered that Brad, who is TJ’s closest friend and who has lived with him for some time, might actually know where TJ gets his money, and that they could ask him without any embarrassment on their part? Ha ha, just kidding, we’ve watched Brad’s attempts at romance over the past couple of years, he obviously knows nothing about anything. 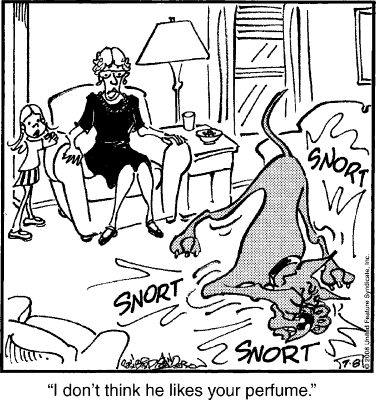 “And the way he expresses his dislike for things is with massive amounts of excrement, so you’d better brace yourself.”

Hmm, perhaps Alice needs to wait a bit before telling Sally about the hidden cameras. Or about SeeTedInseminateSally.com.