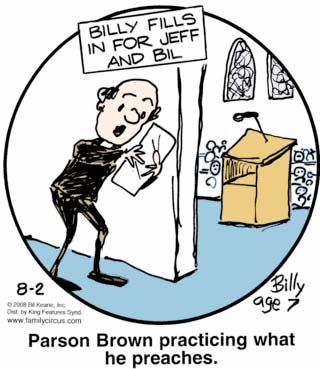 OK, congratulations Bil, or Jeff, or Jeffy, or Billy age 7, or Glen, or whatever combination of blurred notional and actual people, past and present, I’m supposed to accept as the perpetrator of this comic: you have officially baffled me. After long contemplation, I finally realized what this damn thing is supposed to mean: Pastor Brown is rehearsing his sermon just before he goes out to start the service, ha ha. But my mind took some terrible turns to get there. Did his vision of Christ-like meekness and humility involve hiding from his congregation lest his position of leadership at the pulpit give rise to the sin of pride? Had he attempted to revive the ascetic practices of the early Christians, causing his legs to wither from the years he spent sitting atop a pillar? In the end, I was forced to spend valuable brain energy on this pointless play on words. Pastor Brown may offer you forgiveness, but I won’t.

“Ha ha, another underfunded government agency’s going to be on the receiving end of a frivolous lawsuit! Luckily, neither of us work for them, and you won’t catch my daughter going to some hellhole of a public school, so we don’t have to care! Good luck with that, losers! I sure hope one of your employees has enough copious free time to stalk your way out of the predicament.” 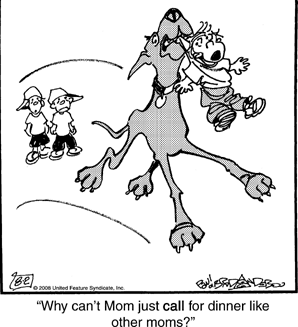 This would be a good opportunity for one of my usual cheap “Marmaduke eats humans” gags, but in fact it seems more likely that Marmaduke is bringing a human home for his owners to eat. 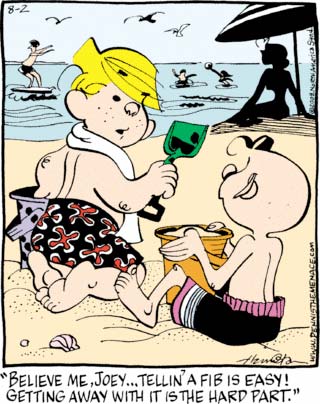 “So that’s why we’re practicin’ how to hide a body.”