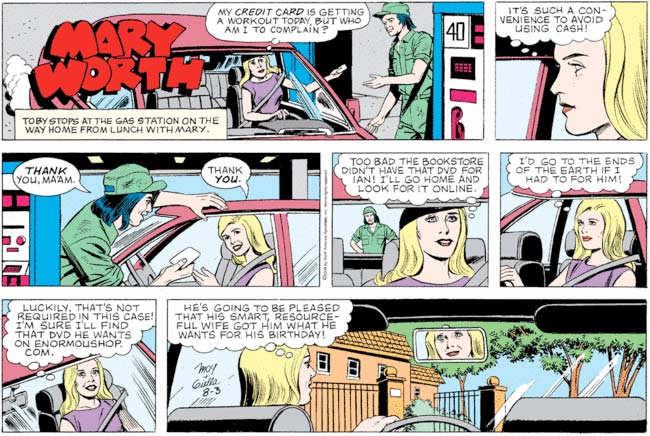 Have any of the poor saps trapped in the bleak hell that is Mary Worth ever been set up for a fall as transparently as poor Toby has been over the past few days? I might feel a little pity for whatever identity theft drama that’s going to befall her as a result of handing out her credit card to whatever sort of greaseballs request it, if she weren’t so damn smug in her thought balloons. “Oooh, look at me, I understand that cash values in the modern economy can be treated as abstractions rather than amounts of actual, physical currency! I know how to look up things on Ian’s Enormoushop.com wish list! I’m the greatest wife — and greatest human being — in history!”

Speaking of smug, whatever ludicrous fraud-based hijinks go down over the next few weeks or months will at least feature Toby’s husband, which gets a big thumbs up from me. It’s been far, far too long since we’ve gotten to enjoy his bloviating chinbearded antics. 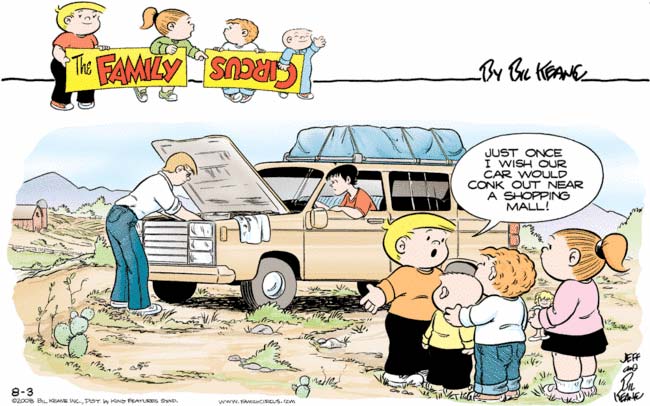 Well, Billy, if the car “broke down” near the mall, your parents would have a harder time convincing the police that all of you were “accidentally” “eaten by coyotes.”

Looks like another perpetually morose character is unable to stop thinking about his body’s early decay and eventual death, and is spreading the obsessive gloom to his still emotionally healthy daughter! Or, as we call it in Funky Winkerbean, “Sunday.”