Pity poor Herb, who’s been reduced to making a series of “funny” reaction facial expressions in his own comic strip while his doctor dishes out the “jokes.” Sure, the strip could have been recast with almost no effort at all so that it consisted of actual dialog being exchanged, by why bother when you have the option of non-stop hilarity in its purest form: a lecture from a doctor with comical hair. At least Herb got to contribute something, rather than just silently picking something up while a stranger contemplates adoption like Jamaal did earlier this week. 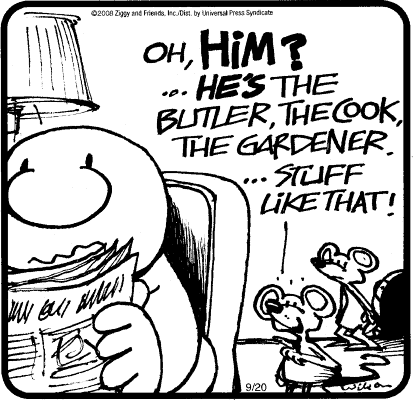 Sassy mice claiming rights beyond their station might appear in any number of second-tier long-running comic strips (see for instance Garfield, 9/8-11/08). But that crooked-mouthed expression of pure humiliation and helplessness on our hero’s face? That’s the special soul-blighting value-add you only get from Ziggy.

“He’s a filthy animal that we let live in our house because we’re insane! He’s covered with fleas, and he steals things, and he has rabies!”

Wow, this took a turn for the depressing real fast. Uh, don’t do drugs, kids, OK?