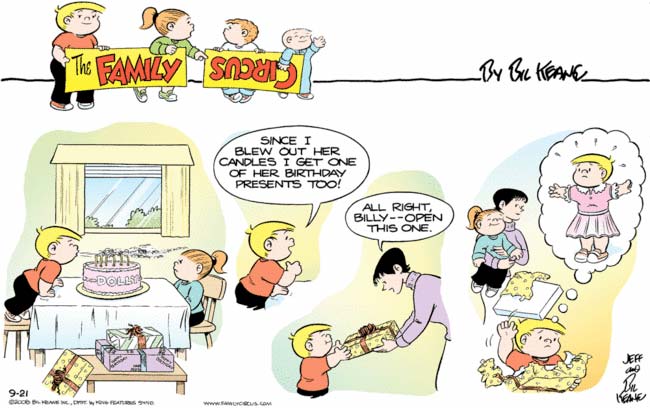 The only Billy-related Family Circus trope I like better than “Billy is an angry little jerk” is “Billy is a jerk and then gets his terrible comeuppance.” Where are the parents in panel one to prevent Billy from committing the ultimate birthday-related sin: blowing out the candles on a sibling’s cake? But Mommy is there to prove that revenge is best served with a scoop of ice cream: because the absolute rigidity of gender roles is enforced from birth in the ultraconservative Keane Kompound, she knows that the ultimate punishment is to force Billy to briefly entertain the thought of wearing one of Dolly’s hideous dresses. Billy’s heartbroken expression as he tears open the box, along with Mommy and Dolly’s looks of smug satisfaction, make for an excellent payoff. 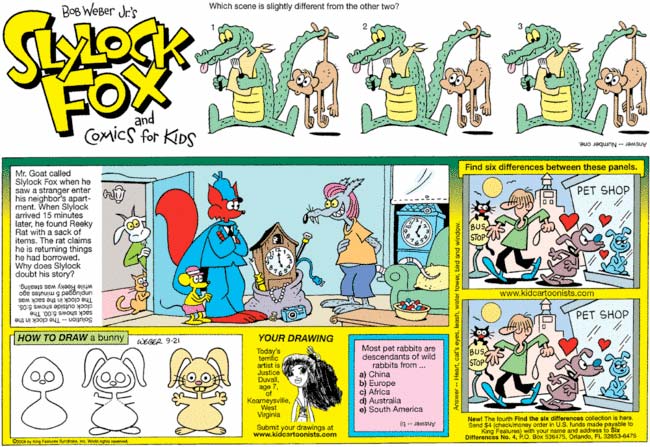 If you squint at the solution to this mystery, you’ll learn that we’re expected to convict Reeky Rat because the clock in his loot bag is only a few minutes behind the actual time. As if 5 o’clock only happens once and never comes ’round again! John Law is just prejudiced against Reeky because he carries his totally legitimately borrowed items around in a burlap sack. Well, that’s how they do it down at the trailer park, OK? They don’t have platinum-encrusted Kate Spade bags or whatever it is you fancy city elitists use. JUSTICE FOR REEKY!

The Six Differences panels offer a glimpse at the legendary underground film A Dog’s Life In Amsterdam. 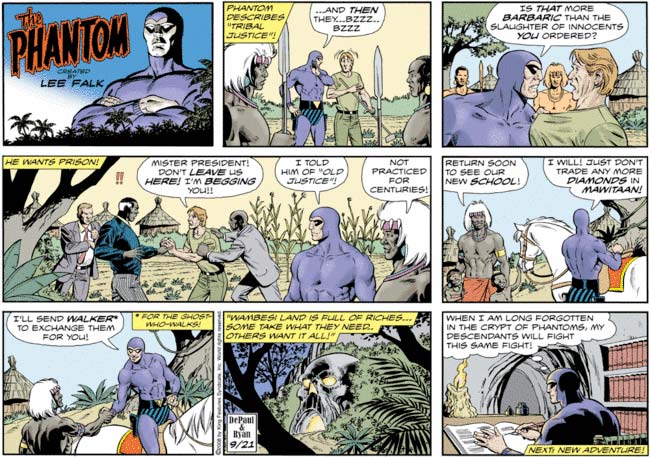 The not terribly interesting Sunday Phantom storyline just wrapping up here involved these tribesfolk, living on their traditional diamond-lousy lands, being held hostage by sharps from the big city before Stripey Pants helped them out. But this strip is notable for the last panel of the second row and first panel of the third, as they indicate that the title of this adventure in the Skull Cave Archives is “How the Phantom Got Filthy Rich From His Diamond Monopoly.”