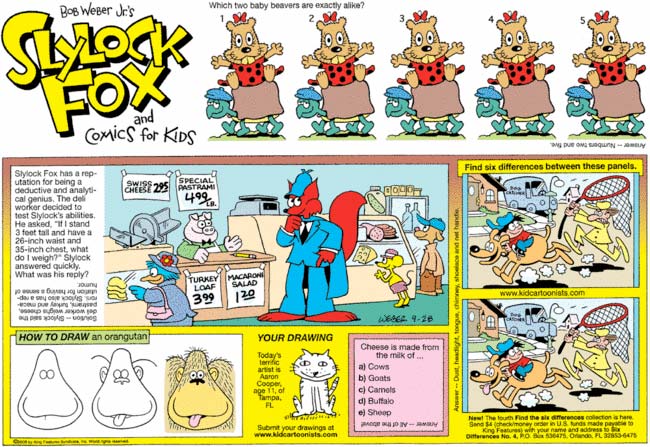 Dum de dum de dooo, what do we have here … why, it’s Slylock Fox, engaged in light-hearted math-based banter … with a pig … who’s working at … a … deli counter? Right next to a case that’s features distinctly pork-like offerings? This … this is an abomination! You just know that our cheerful cannibal is interested in the result of this little math puzzler because it can help him figure out how much usable meat he can get out of the hobos and lost children he lures into the supermarket after hours. The lovingly detailed deli slicer sure as hell isn’t helping, either. I wonder if our deli-man-pig maintains that creepy expression, with the frozen smile and huge, unblinking eyes, as he uses the slicer to turn his hapless victims into fine sandwich-ready meat products.

Yet more disturbing is Max’s fascination with the cheese, as he’s surely imagining the lady cow who produced it, who is kept in perverted captivity, complicated machinery hooked up to her nipples. 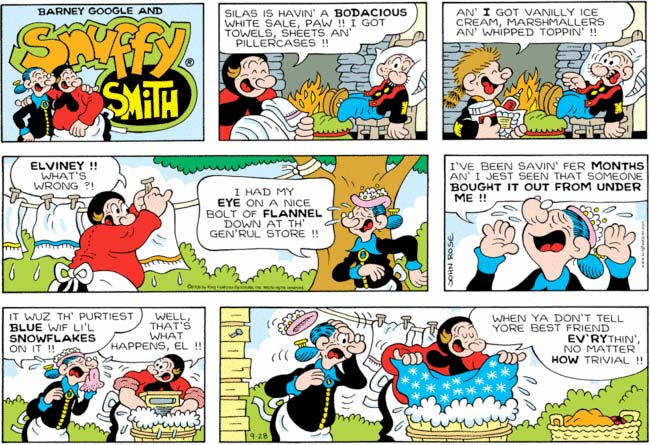 Snuffy Smith more or less traffics in overwrought reaction shots. Usually, as in the second of the throwaway panels, these take the form of laughter so uproarious that it dislodges the tongue, and attempt by their sheer exuberance to make the strip’s lame jokes appear funny to someone. Even in this context, though, Elviney’s look of hat-popping horror in the final panel seems a bit much; to match it, Maw Smif ought to be pulling a blanket made of human skin out of her washbin.