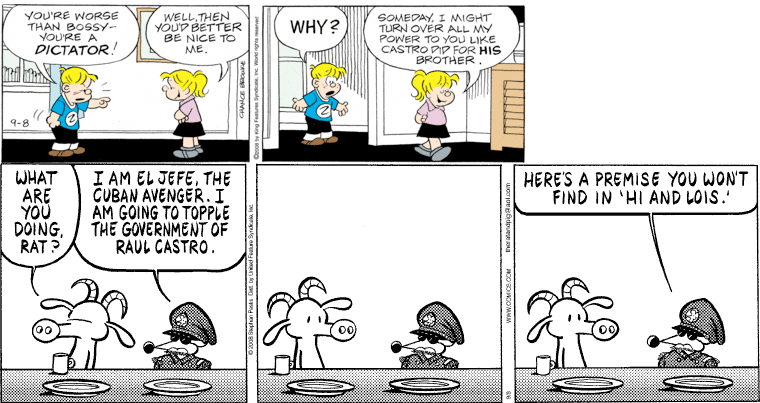 I got about a jillion e-mails about this today basically asking me OH MY GOD DO YOU THINK THIS IS A COINCIDENCE?, which I have to say that I pretty much do, as the jokes don’t work together quite well enough for it to be a coordinated effort. I think Pastis just picked the wrong day to make fun of Hi and Lois (though when the Walker-Browne Amalgamated Humor Industries LLC hired goons burn down his house, he’ll find that any day is the wrong day to make fun of Hi and Lois.) It might at first be hard to imagine that Hi and Lois would be taking on any kind of international politics, but keep in mind that this strip was one of the first to tackle the subprime meltdown, so it’s smarter than it looks.

I’m intrigued by Ditto’s shirt. It looks like when the time comes for him to take absolute power from his sister’s ailing hands, he’ll have a spiffy logo for his paramilitary organization all ready to go. 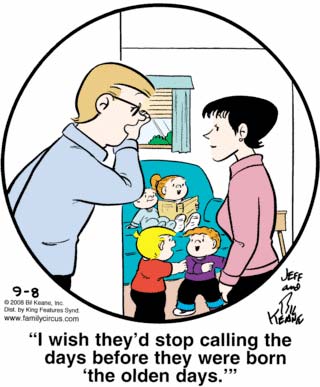 There’s something off about this cartoon. Big Daddy Keane’s indulgent smile clashes with his complaint that the days when his house wasn’t cluttered up by four pants-pooping submorons and their many overpriced toys are now as distant as the Fillmore Administration or the Thirty Years War. And the children’s rather generic hijinks don’t at all imply a brash solipsism in which everything that preceded their birth is consigned to a single inchoate prehistoric moment. Presumably this panel is designed to be repeatedly trotted out and assigned a new “parents say the darnedest things about their kids” caption as needed — which captions, I predict, will only become more bitter as time goes on.

Say, remember the Hulk, the sort-of popular comic book character that became the basis of a hit TV show in the late ’70s, and then later of two not-quite-blockbuster films in the ’00s? Well, Marvin hopes you still have “Hulk fever” as a residual effect of the marketing behind these media properties, because we’re apparently going to get some lame Hulk-themed jokes for the next few days. No matter how bad they get, we can at least console our selves that they appear not to actually feature the hated Marvin himself.