So I was mostly defeated by the FBOFW Wall o’ Text that greeted me on Sunday, but I feel I have to say something, so…

Thank God Deanna gave up on that pharmacist gig to finally get into an acceptable profession for an ovaries-bearing Canadian: sewing, and the sale of sewing accoutrements. Now at last a more qualified man can take her old job advising women on how to “accidentally” not take the pills he prescribes!

The “just for laughs” angle baffles me a little bit. Perhaps now that the Pattersons and their hangers on aren’t being monitored and controlled minutely by their Creator, they won’t be forced to end every interpersonal transaction with a terrible pun; but Deanna, in some form of Stockholm Syndrome, is no longer able to survive without the constant corny jokes. 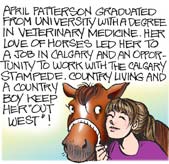 But April, at least, got out. And got to get it on with a cowboy, whom she’ll presumably drop like a hot potato when she finds out that Gerald is getting divorced.

Anyway, Ces Marciuliano’s Medium Large today pretty much has the definitive statement on the subject. 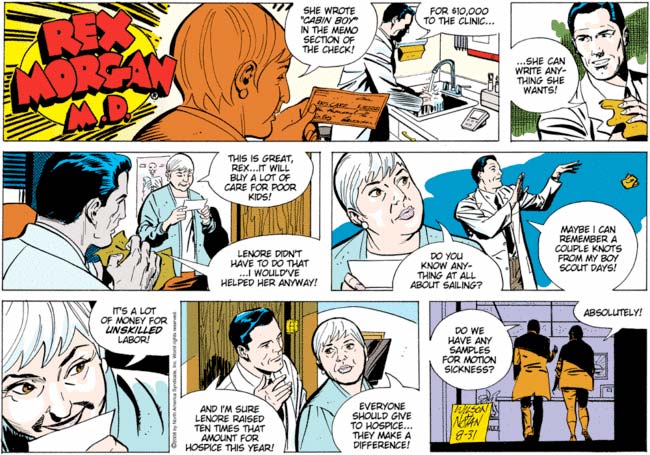 I’m kind of in love with Rex’s little office-basketball move in panel four. “Check it out, everyone! I may not be a big yachting expert, but I’ve still got the athletic talents of my youth! I’m totally not going to cry like a little baby next week while clinging to the side of the boat and projectile vomiting!” 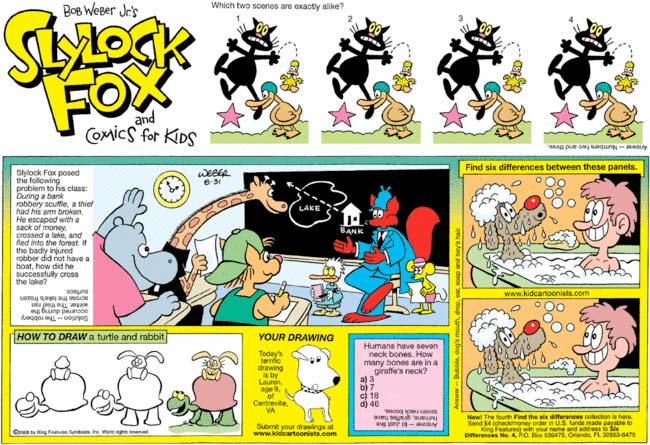 In today’s puzzle, Slylock has gone back to his “Teach other creatures how to be meddling detectives” gig that we’ve seen before. You’d think that this would just produce competition for his own work as a freelance nosey detective, but maybe he gets the big bucks for these classes — especially in this case, in which he isn’t lecturing to kids but appears to be running some sort of adult education program. But the one who looks really anxious about obsolescence is Max, who is regarding that duck with the notepad suspiciously. “Wait — is a sidekick supposed to write things down? Oh, God, I’m going to be replaced! Please, don’t, Sly! I have no job skills!” 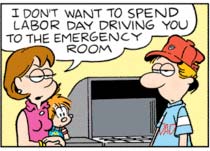 I kind of love this panel out of context. The joke is about terribly fiery grilling accidents, a trope that (and here’s a sentence I don’t think anyone has ever written before) is done better in Crankshaft; but in this panel on its own, with the parents regarding each other with heavy-lidded hostility and Marvin’s eyes wide with terror, it pretty much reads like a threat.