Ever since the infamous Sally Forth-Target-Rush scandal, it’s been important for readers to stay vigilant and call comic artists out when corporate payola corrupts what ought to be a pure art form. Today, we see how brazen some on-the-take comics features can be. This strip was obviously subsidized by Tommy Hilfiger, Fruit of the Loom, or some other underwear manufacturer determined to associate Calvin Klein in the public mind with a disgruntled chicken being boiled alive as part of a terrible joke in an awful comic.

Like most people, I pretty much assume that the placement of the stems of word balloons in Mark Trail is some kind of elaborate and long-running surrealist joke. (Mark Trail itself may be an elaborate and long-running surrealist joke, but that’s a topic for a different time.) Anyway, today’s strip takes this little game to what has to be its logical conclusion, as a grinning Mark holds an entire conversation with himself in front of his dumbfounded family. Presumably he’s not letting Cherry get a word in edgewise, because he’s afraid that she’ll burst into tears upon learning that her husband is once again leaving for a new adventure after only about twenty minutes at home, and he has no desire to be befuddled once more by the expression of so-called human “emotions.” 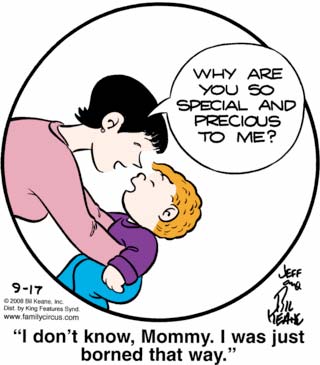 Ha ha, Jeffy! Mommy was giving you one last chance to convince her that you have too much sentimental value to her to sell, and you failed. I hope you enjoy the garment industry! You’ll be starting on the ground floor, which is to say the basement, where you’ll be chained up. 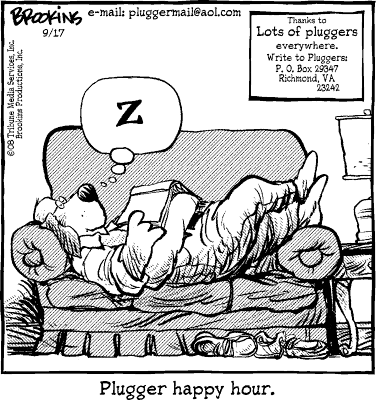 Pluggers know there ain’t much point in going to a fancy bar when you can just get drunk at home on bargain booze and pass out on the couch.

The book is there so that this plugger doesn’t stain his shirt when he inevitably vomits on himself, as pluggers are illiterate.