This may look like just another denouement of just another moronic Mark Trail storyline, in which Kelly Welly attempts to force herself on a wide-eyed, terrified Mark right in front of his long-suffering wife — but take a good look at said wife in the third panel. Cherry appears to be vanishing into thin air right before our eyes! If I understand the Back To The Future saga correctly, this means that Kelly will have had gone back in time and prevented Cherry’s parents from ever meeting, resulting in a Mark that was going to be single and shall earlier be open to her lascivious advances. (Sorry if that was confusing, but verb tenses get convoluted when time travel is involved.)

So it seems that the long afternoon naps were just the beginning; desperate junkies Alan and Haley also have … oh, God, I can barely say it … tattered curtains! And it looks like they haven’t done the dishes for several days! MONSTERS! THIS IS YOUR MILDLY DINGY APARTMENT ON DRUGS, KIDS!!

Seriously, why on earth would a drug habit result in tattered curtains? Did Alan hock his old curtains so he could buy drugs, but then the shred of dignity he had left caused him to root through the garbage to find some rat-eaten fabric that he could hang over the windows to prevent the folks in the building across the street from seeing him in his low state? Or, when he runs out of dope, does he just start smoking the drapery in desperation?

In the second panel of this strip doesn’t make you recoil in horror, you probably aren’t a terrible person like I am. 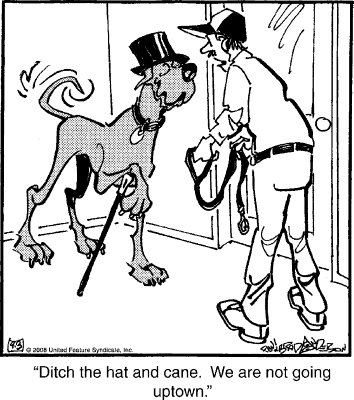 Having tired of devouring the common people, Marmaduke appears to have killed and eaten a comical 19th-century plutocrat.