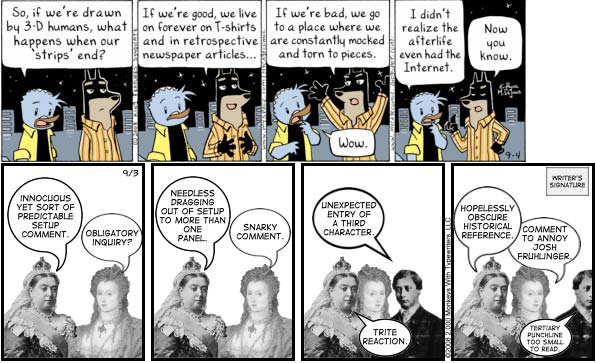 I never claimed to be some kind of paragon of integrity or anything, so, here you go, comics artists: if you mention me by name in your strip, I will acknowledge it in my blog, because I’m a whore like that, though sometimes I’ll be a day late. This is the New Adventures of Queen Victoria, a pleasingly wacky vaguely-historically-themed public-domain-clip-art-based strip that is on the GoComics site (and maybe in newspapers?). It’s usually not as meta as this installment, though you know I love meta. It’s far enough away from the traditional daily strips that I mock here to get regular attention, but I did finally pop it into my RSS reader. Take a look, won’t you?

Speaking of meta, the characters in My Cage are coming perilously close to recognizing their own fictional nature. Hopefully it’s not my site serving as the locus of their eternal torment when the Cartoonists turn their back on them. 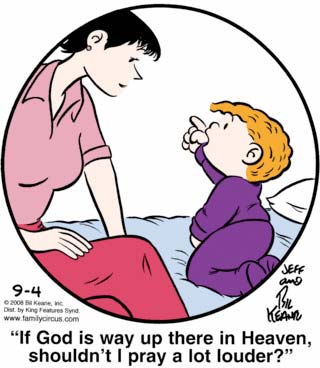 Speaking of those rejected by their Creator, we have Jeffy desperately trying to get the attention of the benevolent God that he still believes to exist, despite the evidence of his own torment. It doesn’t matter how loud you shout, Jeffy! You’re always going to have to debase yourself with awful puns and wear the hideous purple union suit, because that is His inscrutable plan.

And speaking of whores, Apartment 3-G continues its policy of darkly hinting at the lows to which drug abuse can bring you without actually spelling anything out. “Time to get out there and make some money … at my job as a middle manager in the accounts receivable department of a mid-sized corporation! Oh, there’s no level of depravity I won’t stoop to so I can get some more of that sweet, sweet dope!”

You’ve probably missed it what with all the nonspecificity rampant in this strip, but the place where Herb and Jamaal crack vaguely wise with one another each day is a soul food restaurant that they own and operate together. Thus, the fact that Herb has dragged his ennui-inducing diet lunch to the restaurant to eat ought to tell you something about the stuff that our dynamic duo serve to their customers. “I mean, a carrot and juice is pretty bland, but God knows I’m not eating the horror that we cook here. I’d be dead of colon cancer within the week.”

A casual observer might think that Rex and June are gently mocking Lenore in this exchange, but longtime RMMD readers know that they’re actually seeing who can inflict the most passive-aggressive wound on the other here. June taunting Rex with the prospect of sex with a woman, Rex boasting of his future “cabin boy” antics … good times. I have no idea what Rex’s plan for that thing in his right hand in the third panel is, and I’m not sure I want to know. The best we can hope for is that he’s going to stab himself in the throat to end his misery.