OK, I think we all know where this is going — Sue will be so touched by Mark rescuing her from an alligator and the simple kindness of these forest folk that she will inexplicably allow her valuable swampland to remain a haven for dangerous reptiles, rather than develop it into a strip mall anchored by a Barnes and Noble and a P.F. Chang’s, as God intended. This will set up a conflict with her money-minded ex-boyfriend, whom Mark may have to punch, blah blah blah. 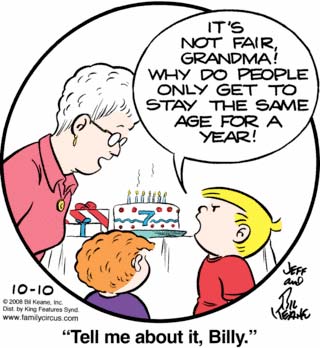 Good lord, is anything safe from Angry Billy’s flailing, aimless rage? Now he’s incensed at the very concept of the linear progression of time itself. “Seven sucks! I hate seven! I want to be six forever! SIX! SIX! Screw you, seven!” Personally, I’d be pretty nervous being in such close proximity to this tightly wound little rage-stump, but Grandma looks remarkably serene. Maybe she’s somehow got inside information on the exact time and place of the inevitable killing spree.

Peter Parker spent the early part of this week bitching about the idea of a museum show of clocks, but now he’s decided that it might be a good place to intercept the fake Spider-Man because, you know, trying to figure out something better would be hard. He’s also not traveling around in costume because of the dastardly deeds of the aforementioned fake Spider-Man, so he’s apparently chosen just to climb up the side of this wall, in broad daylight, without hiding his identity in any way because who cares. This strip should change its name from The Amazing Spider-Man to Spider-Man: Whatever.

Everyone knows that plugger coffee comes in a $12 can that lasts for months, and is made with a scoop of crystals and some boiling water. Dog-man plugger here would be no more likely to be leaving the store with a bag of coffee beans than he would with arugula or a copy of the Economist.

By the way, I’ve seen Reed Hoover’s name in Pluggers often enough that I Googled him to find out how he became such a plugger-savant, only to find this two-year-old article from the Dallas Morning News. I urge you to read it all the way to the very end! You will not regret it.