You know that things in Mark Trail are about to get especially awesome when Mark strides into the midst of a gang of rowdy, bloodthirsty hillbillies, armed with nothing but his fists, his self-righteousness, and bold font. The last time he walked willingly into such a hornet’s nest of rustic hate was when he rescued Andy from a backwoods petnapping compound; first he declared his intentions to spring his beloved dog in front of armed hicks, then absorbed a kick to the groin and proceeded to toss his overalled nemesis to the pigs. Today, the clan of sinister yokels he faces is even more numerous, but Mark cares nothing for the odds, and will save yet another pet from yet another terrible fate.

The key part is that it’s a pet (or a PET, as Mark puts it). Wild raccoons: you are on your own, and will do battle with dogs to delight the rednecks for the foreseeable future. It’s nature’s way!

The real punchline of this story will come after Mark returns to the cabin in triumph to bring Sneaky home. Unable to sate the bloodlust he worked up while chained to that log, he’ll drown his beloved family in the bathtub. Mark will find their half-devoured corpses months later when he stops by to visit, and then Sue will finally be able to build that strip mall.

There are so many things wrong with Mary’s self-appointed mission as a relentless meddler, but here’s the wrongest: Mary really doesn’t understand human beings, or their emotions, at all. “Sorry for the years of emotional abuse! Here’s this expensive but ultimately useless bauble I purchased at a store. I know that based on the foliage here in upstate New York it’s mid-June, but, FYI, this is your Christmas present, so don’t expect anything in December. Now, who’s ready for another 18-hour practice?”

And that’s the day that Luann settled on her future career: phone sex operator.

It had been eleven days since Hi and Lois had forced Chip to join the Army, sold Trixie to the highest bidder, and then got in the car and driven off to parts unknown. Dot and Ditto had eaten the last edible matter in the house. Things were about to get ugly. 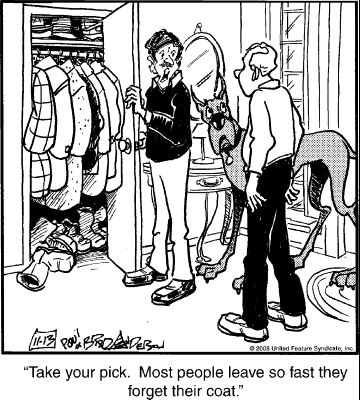 And by “leave so fast they forget their coat,” he means “are devoured the moment they take their coat off,” of course.