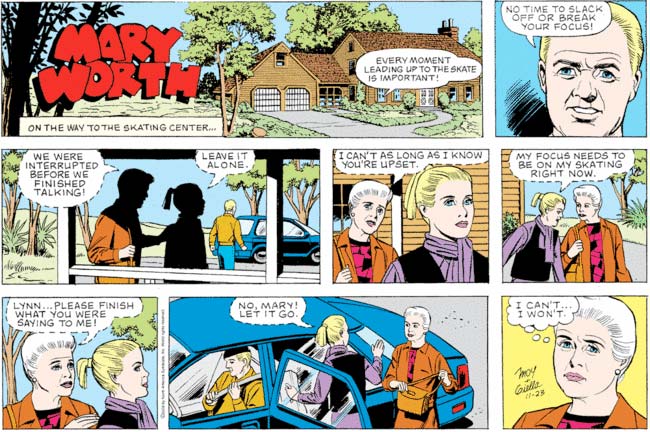 When I was a kid, my dad told me stories about his high school health teacher, who in turn told my dad a set of entirely fanciful “facts” in the course of his education, the most prominent and horrifying of which was that a gila monster could bite on to your hand and become attached so firmly that the only way to get it off would be through surgery. Though this was explicitly presented to me as not reflecting the true nature of that gentle if venomous desert lizard, it was nevertheless an extremely vivid image that my younger self spent far too much time dwelling upon.

I bring this up now because the usual metaphors used to illustrate a tenacious, unyielding grip — a vise, say, or a bear trap, or a pit bull — are wholly inadequate to describe just how tightly Mary is clinging to the dark secret Lynn hinted at earlier this week. There’s only one way to put this: Mary has locked her jaw around the thin limb of Lynn’s hidden scandal like the nonexistent gila monster of my father’s health teacher’s fevered imagination. She will remain just within Lynn’s earshot indefinitely, hissing orders that she give up the goods, until we finally learn just what dark stain on the poor young woman’s soul is making her so very unhappy. PREDICTION: It will turn out to not be particularly interesting. 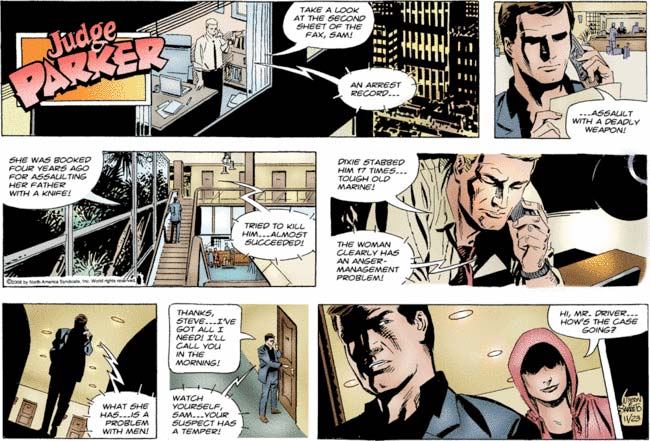 Judge Parker has played the sexy lady card in this storyline particularly hard, in that the main guest stars are a sexy lady detective wearing leather pants and a sexy lady stripper wearing very little. But as we see illustrated today, the only thing more exciting than a sexy lady is a deadly, stab-happy sexy lady (though perhaps that’s a shade less exciting than a sexy lady wired with explosives.) Anyway, this will no doubt very quickly devolve into some sort of terrible pit of Mike Hammer-style faux-noir misogyny, with the only question being whether Sam trots out his detached monologue about dames gone wrong and the men they drag down with them at central booking or the morgue. 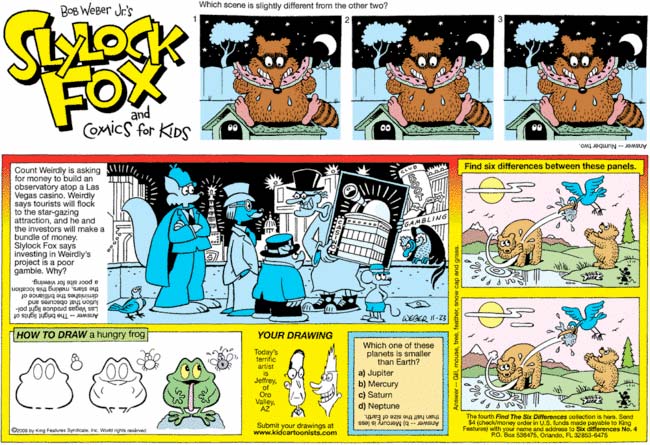 There is no doubt that comics reflect the essential zeitgeist of their age. For instance, when Slylock Fox was launched in 1987, I’m sure most of the crimes Sly was called on to solve involved muggings, petty thefts, break-ins — the sort of threats that obsess the middle classes when they fear that the violence of the proletariat is on the verge of boiling over. Today, though, as our economy begins to unravel and we are told that the culprits are the captains of industry and financial instruments that we can’t begin to understand, our fox detective is more and more frequently being called on to prevent corporate flim-flam jobs and, as we can see here, shady real estate deals. If only Slylock were appointed to head the SEC, maybe we’d be able to get to the bottom of our financial woes, through careful and deliberate ratiocination and/or information that we aren’t actually privy to.