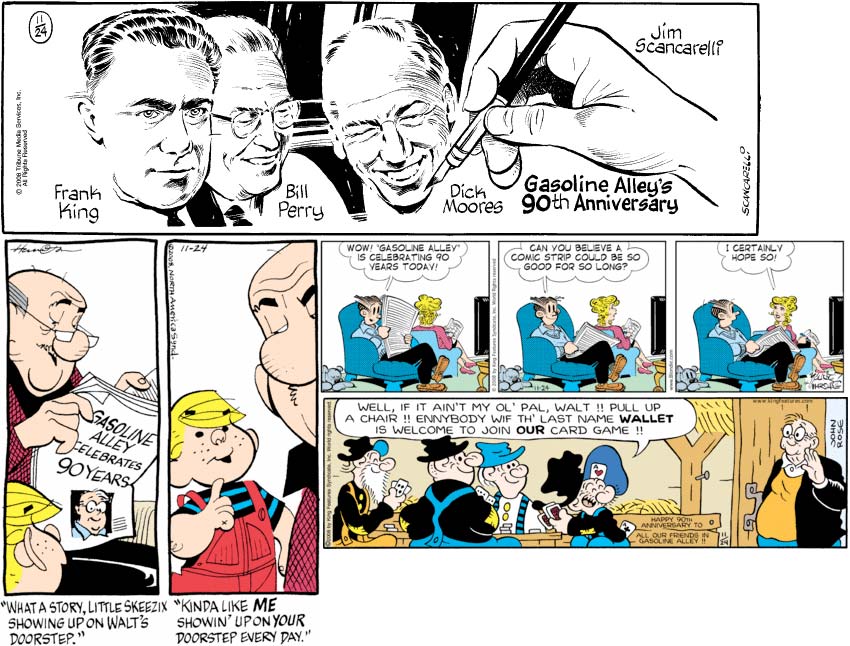 Hey, remember a while back when Blondie hit its 75th birthday party and the whole comics page was forced, apparently at gunpoint, to celebrate that achievement of inertia? Well, today is the 90th anniversary of the launch of Gasoline Alley, and its longevity is being celebrated by the entire industry these three insanely long-running legacy strip: Barney Google and Snuffy Smith (almost as old at 89, though Snuffy Smith himself did not appear until 1934), Blondie (now 78 years old, showing itself still classy with this reach-around), and Dennis the Menace (a relative baby at 57).

The Gasoline Alley strip itself rather nicely gives us a look at the first three men who worked on the feature; we shall know current artist Jim Scancarelli only as a enormous and terrifying disembodied hand, at least until the strip’s 120th anniversary in 2038. Of the tributes, Blondie wonders if it will be on top of its game, with side-splitting joke after side-splitting joke about giant sandwiches and workplace abuse, fifteen years from now; Barney Google transforms beloved Gasoline Alley patriarch Walt into some kind of pinheaded monster from the depths of your worst nightmares; and Dennis the Menace is too boring to merit further typing on my part, so I’ll stop right here.

Say, remember last year when Mark had some kind of extremely half-assed flirtation with Sam Hill, sexy biologist, that was entirely one-sided (and not on Mark’s side) and led to absolutely nothing? Well, apparently it elicited lots of angry letters to Mark Trail headquarters about the sanctity of marriage and whatnot, because now every time we get even a glimpse of what I guess is supposed to be the quarter-assed flirtation between Mark and Sue the Confused Industrialist, one or both of them reflexively start blathering on about his joyless, asexual marriage. Today Jack Elrod has decided to dedicate his artistic skill to one of those awesome crabs with one freakishly large claw, and who can blame him when his other option is to draw these two dopes totally not coming on to one another?

Aren’t those giant crab-claws the result of sexual selection? Perhaps this symbolizes something about this slow-motion love triangle — like, maybe Cherry is about to show up and bludgeon Sue to death with her enormous forearm.

Well, our long-promised Morgan Family Cruise Boat Adventure is finally here, after a brief interlude for yachting hijinks (this being Rex Morgan, three and a half months really does count as “brief”). Anyway, we’ll soon find out what sort of nautical medical drama Rex will have to deal with on this dreadful voyage — Legionnaires’ disease? nausea? boredom? — but for the moment, I’d just like to point out that in the world Rex Morgan, M.D., the taxicab industry is dominated by Rastafarians, or at least by dudes in rasta hats.