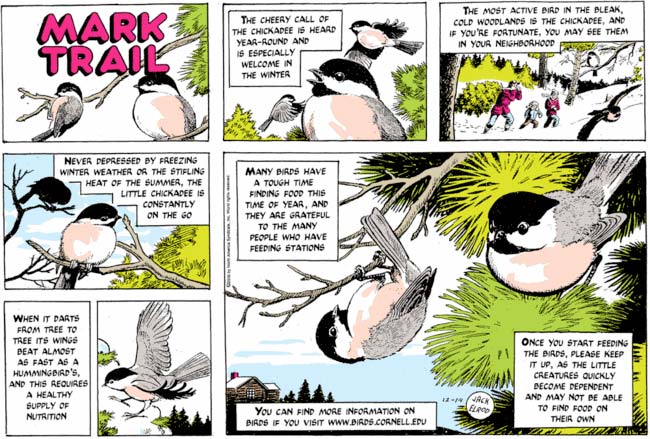 Kudos to Mark Trail for blowing the lid off of the weird little world of the chickadee! These birds stay active in the bleak, cold winter hellscape that most of their feathered cousins are clever enough to flee for warmer climes. Mark claims to be able to read the feelings of these non-English-speaking little creatures, saying that they’re “never depressed” by having to stay north all winter, but their behavior seems to tell a different story. As he describes it, they want nothing more than your handouts, and once they start getting them, they lose all sense of personal initiative, becoming nothing more than avian hobos, hopping around in your backyard begging for your scraps — and doomed by their own dependency if you grow bored with their antics. This seems to me to be indicative of a very poor self-esteem that doesn’t jibe with the cheery demeanor that Mark is trying sell us.

Kudos also to my alma mater for hosting a bird-related Web site from which Mark Trail can crib valuable ornithological information! Keep coming back to birds.cornell.edu for such bird-related headlines as “The Long Trek of the Bar-tailed Godwit”. 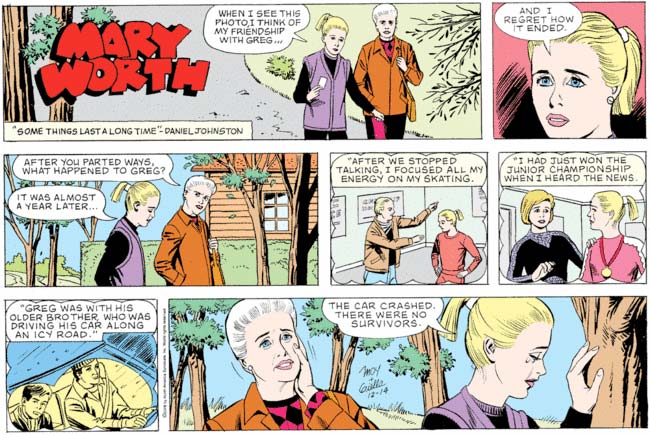 Here’s a little clue to help you get situated in Mary Worth: no matter who’s talking, it’s all about them. Thus we get to the climax of Lynn’s sad story: her friend Greg, whom her dad forced her to shun, was killed in a car accident, his brother behind the wheel. Would he still have died if Lynn hadn’t broken off their friendship? Obviously not! Was his horrible, untimely death intended to break her heart and serve as a direct rebuke against Lynn’s father? Of course it was! Greg’s family was probably broken up about it too or whatever, but the important thing about it is that it sent Lynn into a downward spiral that has affected her skating.

The shocking punchline to Lynn’s tale has sent Mary into head-wobbling palpitations in the final panel. This is not because she shudders in empathy for the young skater (ha ha, like you even need me to say that) but because the mention of death by car crash has given rise to intrusive feelings of guilt concerning her part in Aldo Kelrast’s fiery demise. Once she manages to suppress these feelings back into her Shame Place, she will be taking this out on Lynn, obviously. 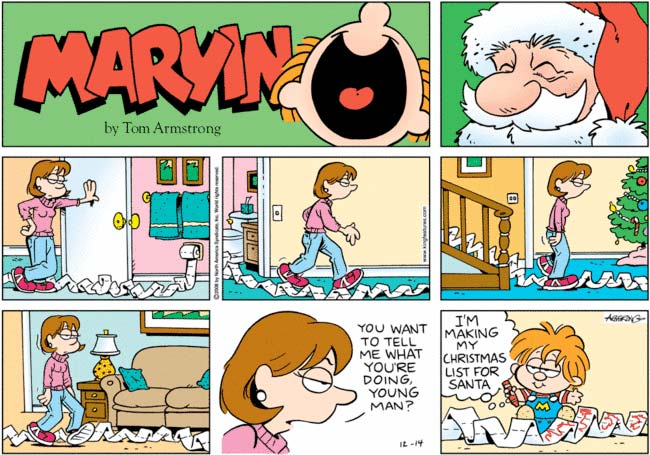 Anyone who doubts that St. Nick really is a saint need only take a look at the second panel of today’s Marvin, in which he continues to display a cheery disposition despite being immediately adjacent to the strip’s titular hell-infant in full-on screaming mode. We’ll see if that crinkle-eyed smile persists after he receives all sixteen yards of Marvin’s illegible, saliva-fouled Christmas list. 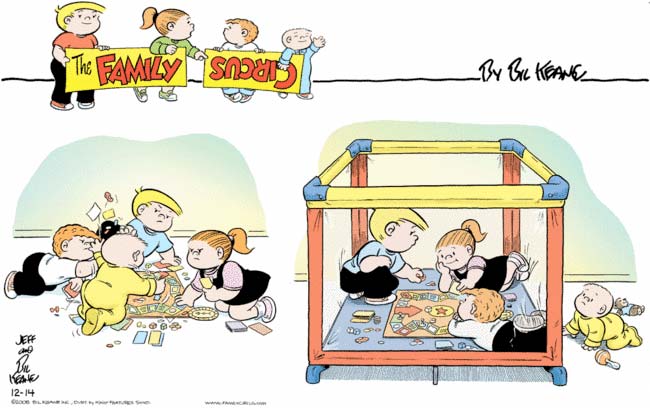 Phase one of PJ’s plan — confining his siblings in an enclosed space that would be difficult to escape from quickly — had gone perfectly. Operation Only Child was well on its way to a bloody but triumphant conclusion.