Hey, here’s something fun I like to do when I’m having coffee with an old friend: in the middle of a conversation, I deliberately structure my sentences so that they’re ambiguous and my interlocutor has to ask for clarification! It’s great way to “mix it up a bit”!

Ha ha, just kidding, obviously, if anyone in real life did this you would think that they were unbearably pretentious, or perhaps suffering from some kind of head injury. “But Josh,” you’re probably thinking, “aren’t these birds? Shouldn’t we be impressed that they’re using recognizable English at all? Cut them some slack!” I suppose you’d be right if we saw these birds engaged in more typical bird-oriented activities — flying, chirping, preening, hanging out on tree branches and telephone wires, crapping on cars, vomiting half-digested insect parts down the throats of their offspring, etc. But these birds have developed any number of advanced behaviors, including coffee-drinking, cup-using, clothes-layering, and crappy-art-from-Pier-One-hanging, so I frankly expect more from them in terms of pronoun use.

If the U.S. military’s mandatory retirement age applies to Camp Swampy, then General Halftrack was born no earlier than 1944, so even as a young man he must have been quite the nostalgist. Still, we shouldn’t question the wizenedness of someone who either appears to have been utterly defeated by this newfangled “CD player” thingamabob, or is simply too feeble to get up and walk six feet to put the disc in. (The possibility that this is all an elaborate ruse to get Miss Buxley to bend over in front of him does come to mind as well.)

Wait, don’t count on … him … can’t saving Jameson? Man, the tension and drama in this strip are entirely syntactic. 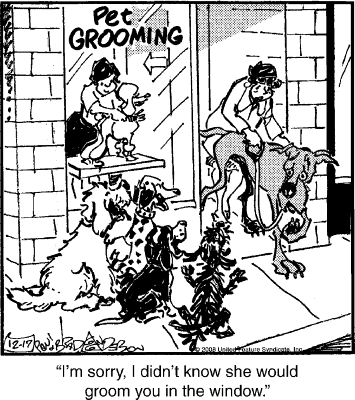 Marmaduke was in that window being groomed long enough for his many enemies to get wind of his location and arrange this ambush.