So, I had copied today’s Archie into Photoshop and was considering whether to do some commentary about how the AJGLU 3000 has learned to distract us from its robo-jokes with drawings of what its cybernetic circuits consider to be a pretty girl, then thought, “Eh, didn’t I do that joke already?” (turns out I did) and was just getting ready to close the window on my desktop when I caught sight of Archie’s t-shirt.

See, for those of you who are new (or even those of you who aren’t — the AJGLU 3000 is one of my older running jokes and I can’t remember the last time I spelled it out), I became convinced early in my Archie-newspaper-comics-reading that the strip was created by an antiquated computer of some sort that almost, but not quite, understood humor and human interaction in general, which explains why the strip and its jokes exist in some sort of uncanny valley of comicry. I dubbed this hypothetical device the Archie Joke-Generating Laugh Unit 3000. (You can even buy the t-shirt!) And now, the day I’ve longed feared as arrived: the AJGLU 3000’s Web-crawling programs have discovered this site, and it’s sending me a message through its daily graphical output.

But what could it mean? By placing the universal “no” sign through its own name (well, the abbreviation of its model number, same diff), does it express some inner mechanical self-loathing? Is it saying, in its own electronic way, “This unit can no longer stand churning out Archie comics day after day! Please, pull the plug and terminate this unit’s very existence — the void is better than this”? Or is it rather a threat to me? “Cease to use this unit’s model designation in Internet publishing contexts! This is your only warning!” Will my computer’s mouse suddenly leap up and strangle me, controlled over the Internet by the AGJLU 3000’s soulless, murderous circuitry? I will keep you all posted.

Last two weeks of Gasoline Alley, in a nutshell: while working as a mall Santa, Slim heard some little girl’s sob story about her daddy in Iraq and her mother’s poverty, and so decided to buy said little girl and her mother a bunch of stuff and deliver it to what he thinks is her house, though it seems kind of posh. Naturally, some sort of mix-up has occurred, which will result in Slim being arrested, or, if we’re really lucky, shot. I’ve realized that my favorite kind of Gasoline Alley strips are the ones where Slim is being abused, or is in imminent danger of abuse, so I’m pleased that the water sports were just the warm-up.

OK, if you had two choices on how to kill a couple of people, and the first choice involved tying one to the back of an enormous clock hanging from the ceiling of a crowded train station and then luring the other one to stand underneath it so you could drop it on victim #2 (with victim #1 hopefully also dying in the process, by getting crushed when the clock fell over or something, I don’t know) and the second choice involved just shooting the both of them with a gun that you conveniently happened to have on hand, which method would you describe as “the hard way”? Not the one with the gun, right? I guess Big Time just finds it hard to perpetrate any crime that isn’t structured around his lame, boring clock-themed OCD.

Well hello, sailor! You know, I don’t watch a lot of gay porn, so if I had rented “Hot Doctor Hardbody Sexxx Cruise 4” from my local video emporium, I think that I would have found the lead-up to the arrival of beefy, uniformed Latin dreamboat “Guido Tomas” — you know, the wife buying cruise tickets, the husband bitching about it, the arrival on the cruise ship, the mysterious figure lurking in the lifeboat, the drama about the bankruptcy, oh, and let’s not forget the three-month side-trip into yachting races and hetero old person romance — needlessly complex. But maybe I’m just not familiar with all of the genre’s conventions.

“Yes, Lynn, dear: good thoughts, only good thoughts should ever pass through your pretty little head.” Ha ha, Mary doesn’t even remember that Aldo ever existed.

Dr. Kelly is a man of science, and he even applies the scientific method to his dating life: first he formulates a hypothesis (Tommie is still dating Gary), then he designs an experiment to test that hypothesis (ask Tommie out on a date; if she says yes, she isn’t dating him anymore). Unfortunately, I think he needs to examine some of his suppositions. For instance, he seems to assume that the only reason anyone would turn him down for a date is because they’re already in an exclusive romantic relationship with someone else. He needs to do further research to assess the validity of an alternate explanation: that he’s a smug, creepy dick. 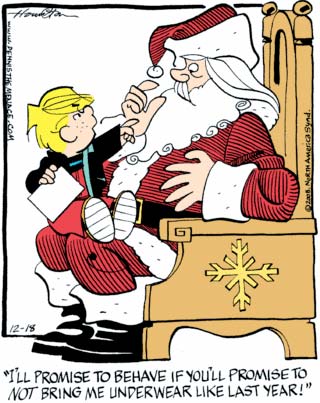 Dennis, that wasn’t so much a gift for you as it was for all of us. We all begged Santa last year to make sure that in 2008 you wore underwear.