If there’s one thing you have to respect Spider-Man for, it’s its recognition of its own narrative limitations. A strip with more self-confidence might try to weave a coherent storyline, dropping crucial bits of information in expository dialog that’s been carefully tailored to seem natural, to establish the changed dramatic milieu. But the Spider-Man newspaper strip would fail utterly at that, obviously, so instead it just keeps interrupting itself every few panels to shriek “THIS IS WHAT’S HAPPENING! IT’S FOR REASONS RELATED TO THE COMIC BOOK, WHICH YOU DON’T READ! ISN’T IT AWESOME AND INTRIGUING?” at you.

By the way, contrary to anything the final panel might have you believe, there will be absolutely no surprises in store in the Spider-Man newspaper strip ever again, or at least not until it makes another arbitrary time/profession/relationship jump eighteen months after something vaguely similar happens in the comic books. “Now Spidey is divorced, working as a systems analyst, and living in Bay Ridge! He’s still a putz, though.”

I have no idea why Marvin, who revels in his non-potty-trained status, is in this grim death-line to the now-extended family’s single toilet. Presumably he’s going to wait until everyone starts feeling really uncomfortable due to nature’s call, then crap in his pants, just because he can. 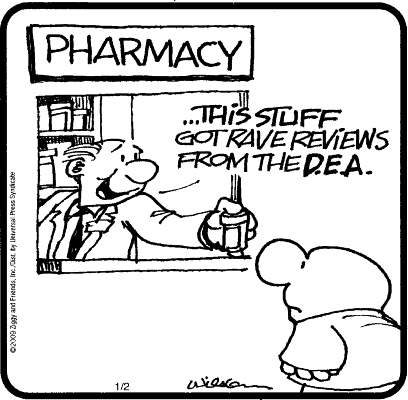 Jeez, Ziggy, you’re looking awful mopey there for someone whose pharmacist is scoring him some prescription medication for recreational use. Try to make an effort, huh?