Hello, everybody! I’m back from my long journey northeastward, re-ensconced in my Baltimore lair, and ready for more comics mockery in 2009! I hope you all had good holiday celebrations of your choice. The question arises, as it does every year, as to just what soap strip offered the weirdest holiday greeting on Christmas day. The contenders:

Mary Worth shoehorned in a barely-readable one-line bit of good cheer into the second panel. This served as a depressing counterpoint to Mary’s turn as good cop to Frank’s bad cop in the determined effort to Keep Lynn Skating No Matter What.

Rex Morgan, M.D., served up a heartfelt tribute to our troops serving overseas, a vanishingly small percentage of whom have the time or inclination to read Rex Morgan, M.D. Is that supposed to be Rex in the Santa hat in panel one, and if so, why is he so grim-faced? Shouldn’t the presence of all that hot man-meat in uniform cheer him up, just a little?

And finally, Gasoline Alley published an excellent template of a nice design that you can get tattooed across your chest or shoulders if you join a particularly festive and holiday-oriented gang.

But the real present came a couple of days later:

You know, too few vigilantes are willing to go the extra mile anymore by shouting “SURPRISE!” at their bearded prey while tackling them. The world is poorer for the loss of those sorts of details.

And hey, I’d be remiss if I ignored BIG DOINGS AFOOT IN SPIDER-MAN LAND! 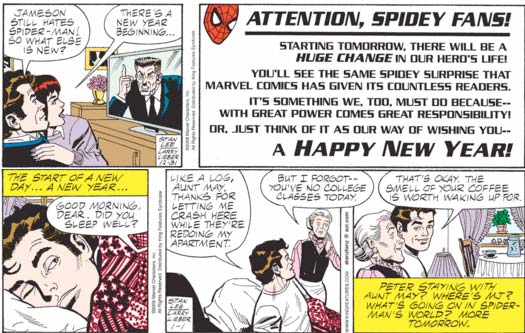 OH MY GOODNESS WHAT COULD THE BIG CHANGES THIS WALL OF TEXT HAS PROMISED US BE??? Instead of watching TV and whining to his wife about how much money she makes, Peter is sleeping in and letting his aged aunt cater to his every need. SO THRILLING!!! I seem to recall some sort of thing in the Spidey comic books involving MJ and … a deal with the devil? Maybe? So they got retroactively satanic-divorced or something? I don’t actually read the Spider-Man comic books, but I recall a lot of people complaining about it, so I hope that bringing this thrilling plot development to the Spider-Man newspaper strip manages to make said comic strip even lamer, in ways I never dreamed possible.

Unlike Spider-Man, I promise you exactly nothing new for 2009. I’ve pretty much figured out my thing and you’ll keep reading it and liking it! As long as they still print newspapers and still print comic strips in those newspaper, I’ll be here, so, if current trends hold true, you should have a good 18 months of this site left to enjoy.

Oh, and finally: my site has been nominated for the Best Humor Blog category at the Weblog Awards! Holy crap! Don’t worry, I’ll be plastering links everywhere when voting starts in a few days. And Ces Marciuliano’s Medium Large was similarly nominated in the Best Comic Strip categories. Stretch your ballot-stuffing muscles!