A few days ago, we saw Patty get slapped around by her husband for the simple crime of letting a filthy, disease-ridden deer wander around in their house, pooping everywhere. I couldn’t bring myself to make a funny about domestic violence at the time, but I knew that Mark would eventually be called upon to deliver the righteous punches to Patty’s cruel spouse. And yet today, we see that Mark is in fact equally heartless, though the blows he lands won’t leave marks. “Say, I think it would be interesting to write an article about how bringing wild animals into your house is a terrible idea, for you and the animal! Let’s go take an extensive series of pictures of our idiot friend who did just that, and then run them in the article, with big captions that say ‘MORON’ and ‘ANIMAL ABUSER’! We won’t tell her what the article’s about until it’s published. I’m sure her husband will react positively to seeing her foolishness in print for everyone to see!” It’s about time this strip took on the power-hungry liberal media, represented by Mark Trail, who will stop at nothing to get his pointless stories for his stupid magazine read by nobody.

I was in a creative writing class my senior year of college, and one of the my classmates wrote a story about a girl who was always looking in her bedroom mirror and thinking she was fat, and eventually she developed an eating disorder and died, and afterwards her mother realized that the mirror was bowed outward a bit in the middle, making her look fatter than she really was. We were not kind to that story when it came time for the peer review; and yet, when I moved out of my tiny studio apartment that summer, I discovered that my only full length mirror was in fact bowed outward just as the story described, and while I had not become a desperate bulimic or anything, I had been worried about what I perceived as my encroaching portliness.

My point is that young people are dumb and that this scheme, in which a perfectly healthy Bryce will be flimflammed into trying out for the basketball team against his wishes with Photoshop trickery, is actually halfway plausible. Bryce’s sister just wants him to join the team to make friends and get out of his funk, but I hope she’s happy when he commits himself to a grueling 18-hour-a-day workout schedule and limits his daily meals to a few pieces of diet bread. After he drops dead of starvation in mid-layup, his life story will be dramatized as the made-for-TV film Please, Bryce, Eat! presented as a special event on local public access cable, hosted by Marty Moon. 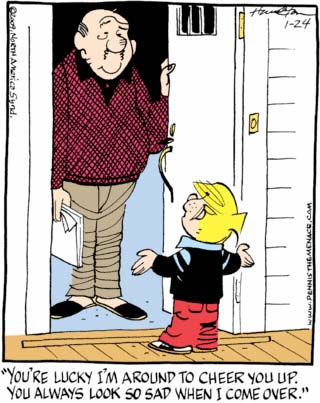 Good lord, look at Mr. Wilson’s pants — they’re obviously designed for a man at least six inches taller than he is now. The poor bastard isn’t sad about Dennis’s sub-menacing chicanery; he’s obviously realized that he’s shrinking rapidly, and will soon be no taller than his irritating houseguest, only to subsequently vanish altogether.