I’m having a bit of trouble understanding exactly what the idea is that sassy Montoni’s waitress Rachel is trying to get across in the final two panels. Is it “We cover up our anxiety about the quality of our food by aggressively insisting that you eat it at all and pretend to be enjoying it, even though you’ll probably suffer a massive heart attack about halfway through, because of the grease?”

I am not, however, having a hard time following what’s happening on this date. Apparently, earlier Cayla told Les, in a sultry voice and with hooded eyes, that she “didn’t want to be good anymore.” Naturally, he interpreted this as somehow relating to her diet, so he took her to his artery-busting place of part-time employment. The fact that he thinks he’s impressing her by throwing his weight around at the local fast-food place, where he took an afterschool job not because he needed the money but because he was lonely and wanted to spy on his teenage daughter, tells you everything you need to know the direction in which this date is going. 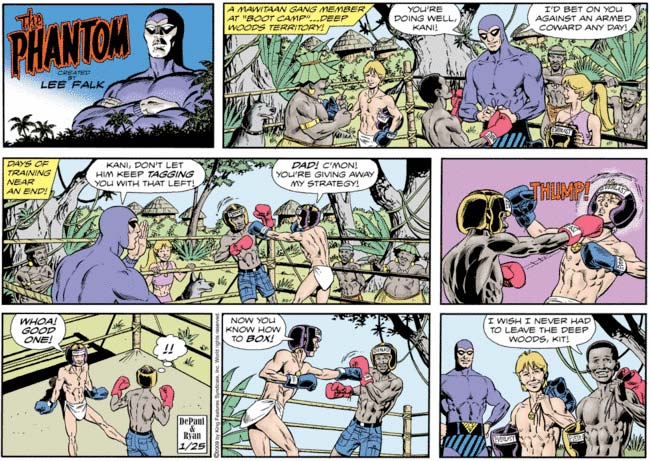 The current Sunday Phantom storyline has featured Kani, a juvenile delinquent from the mean streets of Mawitaan, being rehabilitated by the Phantom and his cheerful children. Today Kani learns a few lessons that will do him well in the tough, gang-ridden environment where he grew up: that punches with padded gloves will easily best men with guns (this coming from the only superhero I know who carries a pistol), and that when you land a particularly good punch your opponents will remark favorably on your pugilistic skills. Surely if the big purple guy just wanted Kani offed, he could do it more efficiently than this; presumably this is part of some elaborate reality-prank show, where Kani will get gunned down in an alley on his first day back home and then they’ll play a muted-horn wanh wanh WANNNNH. 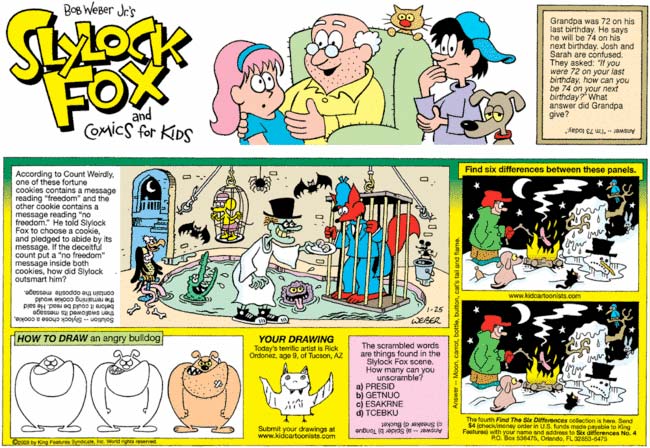 The main Slylock Fox mystery isn’t particularly interesting to me today (he’s going to eat the fortune? really?) but I am charmed by the puzzle in the strip’s top layer. Presumably, Grandpa has set up this elaborate brain-teaser to make his grandkids feel bad both about their intellectual limitations and about forgetting his birthday. “So you know the birthday cards you get every year with a $20 bill inside? Well, you can forget seeing any more of those. That’s now what I call ‘Grandpa’s bourbon fund.'” 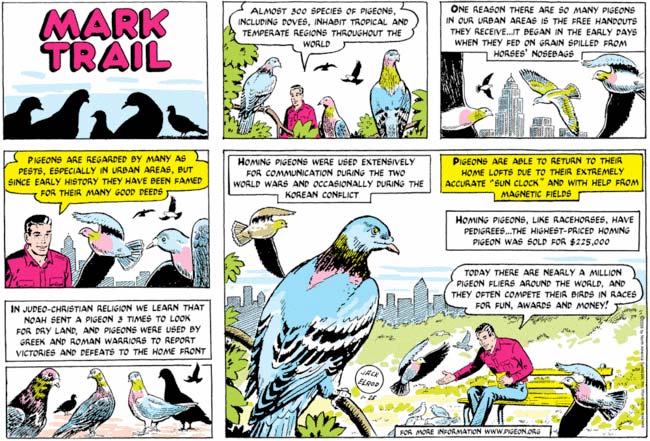 Coloring madness during the week (and yes, I do intend to follow up with you nice people who contacted me about it, I swear) can at least be explained by the fact that the Monday-through-Saturday strips are drawn and colored by different people, who don’t necessarily speak to one another. That doesn’t help answer the question of why this Sunday strip features what appear to be pigeons bearing parakeet markings. Presumably next week’s nature lesson will be about wild mushrooms: which are OK to eat and which are OH MY GOD THE COLORS THE COLORS.