Apparently Dr. Joe’s kids will be take on the darndest-things-saying role that children are often called upon to fulfill in adult-oriented comics, and they’re doing a pretty good job so far, daring to question Tommie on her androgynous name, and revealing a hitherto unknown (to me, anyway) fun fact in the process. Kenley’s “Oh.” in panel two seems less like “Thanks for answering my question!” and more like “Yeah, but … but … that doesn’t really answer … I mean, you could go by ‘Abby’ or ‘Gail’ or … seriously, ‘Tommie’, what the hell?”

Of course, if I were Tommie I would probably have responded with “Kenley’s a funny name for anyone who isn’t an insufferable little yuppie brat. OH WAIT.”

The real meat here, obviously, is ultra-embarrassing panel three. Look for Tommie to sputter awkwardly for a few seconds, after which Kenley will say “Oh, my mistake! You’re obviously not anybody’s girlfriend.”

Oh, newspaper Spider-Man, you just can’t win, can you? Even when you’re expressing delight in your elderly aunt’s speedy recovery, you come off like a tremendous douche. In panel three, Peter looks like he’s primarily excited about not having to cook for himself in the immediate future.

Funky Winkerbean characters are beginning to rage against their sadistic God, which should come as no surprise to anyone. Seriously, wouldn’t you feel kind of weird as a comic artist drawing your characters begging their creator for mercy, only to encounter further arbitrary misery? I guess where Funky Winkerbean is concerned, you should replace “feel kind of weird” with “cackle with maniacal glee.” 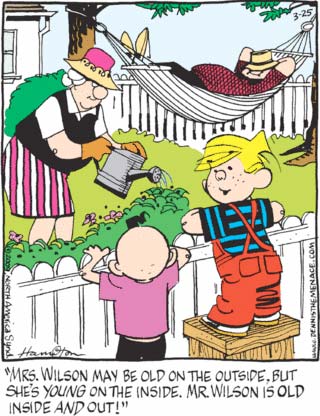 In other words, Mrs. Wilson stays young and healthy by regularly replacing her organs with fresh new ones harvested from children. Dennis only manages to avoid this fate himself by bringing her a steady supply of “raw material” — so, sorry, Joey.