OK, your comments of the week are coming shortly, but first, I do want to draw your attention to one particular comment:

“I wish Ted Confey was a bit less active on Facebook: ‘Ted is having dinner with a bunch of suckers’ ‘Ted is now engaged’ ‘Ted is taking out his checkbook’ … and so on.” –Frank Parsnip

“Ha ha,” you may have thought when you read it, “How very whimsical and droll, the idea that this anachronistic character in an anachronistic comic strip would be using a cutting-edge social networking site!” Well, the jokes on you! If you are a Facebook user, you can now add Ted to your Friends list, and cruise for desperate lonely doctors on the Fans of Santa Royale group. I am overjoyed to pass this information on to you, but I swear I am only the conduit of information — I created neither of these fine bits of Facebook awesome! (While you’re getting all Facebookish, though, why not join the Readers of the Comics Curmudgeon?)

Also! Faithful reader gnome de blog wants you to offer your expert opinion on the The Oregonian’s comics survey! I ask you to vote as your conscience dictates, knowing that this will result in a better outcome than if only the unwashed masses participated. Survey ends on 3/3, so act now!

Also also! Faithful reader Greg sent me this lovely Lichtensteinized version of Margo, which I share with all of you: 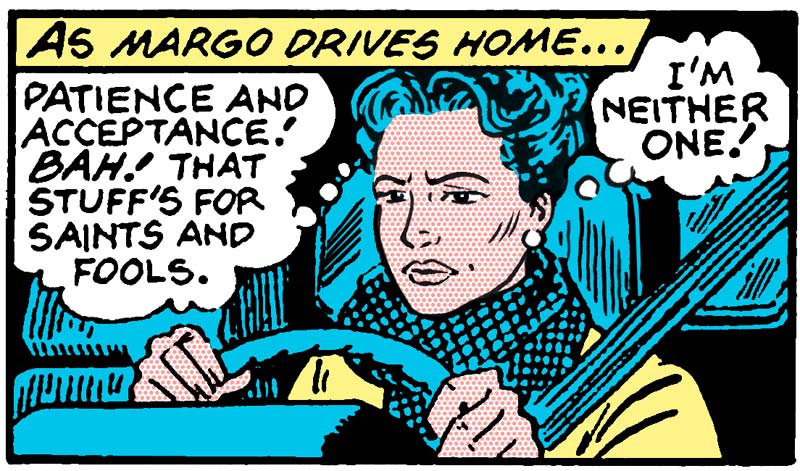 And now … this week’s COMMENT OF THE WEEK! You’ll see that Ted Confey has fully mastered the Internet: not only has he gotten on Facebook, but he’s apparently posting comments on this blog?

“Did I tell you about my dead wife Lydia who is dead? Whose death was in no way suspicious or under unusual circumstances? Did I tell you with the mood lighting?” –Ted Confey

“We’ve seen Mark’s magnificent fists o’ justice pummel a wide variety of things over the years (except girls, because Mark can’t stand the thought of touching them).” –Alan’s Addiction

“Mark’s behavior here is no less than shocking. He actually says ‘Yeah’ instead of ‘Yes.’ By Lost Forest standards, that’s a profanity. Can’t believe he dropped a Y-bomb. What’s next? Chewing gum?” –Joe Blevins

“Wow. First I got to see Minnie Driver and Hilary Swank in person today, now the creator of Ziggy is coming to Ann Arbor! I think I died and went to purgatory.” –scruffylove

“So where do the Judge Parker ladies shop for clothes, anyway? Sherwin-Williams?” –blueberrygrrrl

“Happy memories of Santa Royale? I guess that means being an adult-faced kid and milling around at Charterstone pool parties … nestling in Chin-Beard’s big furry belly on a deck chair, all warm and safe…” –T. Chicana

“That peanut butter wasn’t chunky going down, was it, Jeffy.” –AeroSquid

“I think the only reason Adrian’s remark ‘Happy memories that will be expanded’ sounds so awkward is that she didn’t follow it up with ‘end communication’ as one would normally expect.” –Violet

“All the comments in today’s dramatic DT chase scene end with periods. Whereas most of the dialogue in MW’s boring dinner over the past few days have ended with exclamation points. Of course the DT comments are all from insane people muttering to themselves, but still.” –Poteet

“Back then, Santa Royale was a commune. The only free-standing structure was the co-op, where they sold hand-washed dill pickles and shampoo made from goat’s milk and ground-up pig’s hooves. Oh, how my hair shone. I lived in a lean-to with my mother Terra and my father Gallahad. We would bathe in a small pond shaped like the upper half of a walrus. We called it ‘Upper Half of a Walrus Pond’, but I don’t think the name stuck. There were these green and purple berries that grew in the wild. Whenever we ate them the sun seemed brighter, the grass seemed greener, and we could speak to each other telepathically. Oh how I miss those times. Imagine what it was like to come back here and find it all paved over and commercialized. It was like a small part of me died. That, on top of the death of my wife, has sent me into a spiral of despair that you can only imagine. I cannot wait to leave here and never return, but first, I want to bone your daughter.” –PoeWar

“Because that is what Dick Tracy is all about: Needless but entertaining violence, and lots of squinting.” –True Fable

“I think we all know that Ted is going to turn out to be a con artist or a murderer or something heinous, but Adrian is still doing better in the relationship department than her dad, whose girlfriend turned out to be Mary Worth.” –Whippersnapper

“I wish there was a iPhone app or Flash program or something titled ‘Too Soon?’ Then I could type in: ‘Jokes About Children Contracting Deadly Salmonella From Peanut Butter’ and it would say, ‘Nope, not too soon’ and then I could make a joke about Jeffy.” –Lettuce

“Will someone please introduce muted tones into Santa Royale, so that not every dinner table ends up looking like a ‘Hungry-Hungry Hippos’ board?” –teddytoad

“The ‘fan club site’ was a last-ditch effort on the part of the Santa Royale Times-Post-Union-Chronicle to compete with Craigslist before being driven out of business completely, along with the rest of the newspaper industry. And like Craigslist itself, it quickly became overrun with desperate personals, gay sex ads, and financial scams, which is why it was the perfect meeting place for this nice young couple.” –BigTed

“Let’s see … Patty is married to Ken. She wants children but must settle for keeping a wild animal in the house. The one love in her life has been shot at by her husband. The only people she believes she can go to for help are Cherry and Mark Trail. Oh, did I mention she’s married to Ken? Given all that, expecting any other facial configuration other than ‘sustained, distorted rictus of horror’ would be unreasonable.” –buckyswife

“Dick Tracy has begun to speak exclusively in zen koans. ‘Tracy! Maud R. Err is making a getaway in that blimp!’ ‘Brew your tea in a bowl.'” –Abner Cadaver

“If Margo had been raised as the daughter of a housemaid, maybe she wouldn’t need Tommie to clean the damn apartment for her.” –seismic-2

“Hey Luann — Zits called, it wants its schtick back. Return to your boatloads of unresolved sexual ten … sion … um. Zits, can we talk time-share, maybe?” –Dragon of Life

“Yea … the reason this crown somehow got on my pet dog is that he takes himself too seriously … not that I’m in the middle of a fantasy of being married to a rich and suave dog-faced prince … DON’T YOU JUDGE ME!!!” –Ptychozoon

“Speaking of people being killed or mutilated, Dick Tracy once again proves that talking into a cellphone is more grotesque than any villain’s fiery death.” –Steve S

“‘My late wife Lydia was all I wanted to know about love’? In what universe is that a conversational sentence? But I do like its equivocal nature — ‘after her, no way was I going to return to the living hell of human emotions! Besides, kissing messes up my mustache!'” –Sister Sestina

“Dr. Jeff is just thrilled someone’s going to the trouble to con him out of his money, rather than brow-beating and humiliating him into submission, as he’s used to.” –late2theparty

“For the rest of the comic, Adrian and Mary are sitting across the table from one another, but their heads are awfully close in the first throwaway panel. I can only conclude that Mary has crawled across the table in order to tell Adrian what a blessing it is that she’s found an internet lover. *shudder*” –Patrick

“Killer’s toothbrush looks like it has about four bristles in it. C’mon, dude! You can’t be a playa with a mouthful of rotting stumps.” –Pozzo

“‘As for me, meeting Adrian made me believe I could live again!’ As I suspected, Ted is a zombie and will shortly be feasting on Adrian’s brains.” –TruthOfAngels