Hello all! Your comments of the week coming shortly, but … hey, remember last summer when a reader pointed out that Blondie was just rerunning strips from the ’50s? Good times! Now evidence comes from faithful reader Shannon that the Family Circus apparently thinks the comics statute of limitations is even shorter!

When I saw piggish little Billy chastising Miss McElfresh for “shopping” when she was supposedly “sick,” I knew immediately that I’d seen that panel in one of the FC books I’d had when I was a kid. I wasn’t sure if I still had the book in question, but found it when I went rummaging through some old boxes. I scanned the panel in question (which is from ’70 or ’71) and am sending it along to you. 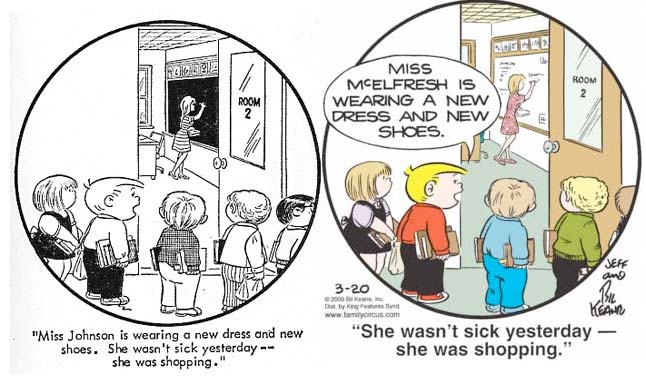 You’ll note that the panel has not been substantially redrawn, though there are some tweaks: the dialogue has been rearranged into the innovative new “partly in word balloons” system, the old chalkboard has been transformed into a modern dry-erase whiteboard, and of course the solid Miss Johnson has been replaced by some piece of ethnic trash. The strip’s obsession with the thought that our children are being taught by flighty whores who might enjoy personal adornment is still front and center, however.

Shannon was also kind enough to send me a scan of the cover of the collection from which the original panel derived: 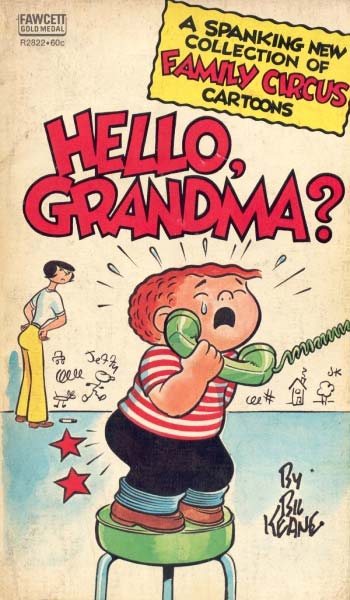 “Today it might be better titled Hello, Child Protective Services?”, he says.

Also! I got the following intriguing email from faithful reader Dave, currently living in China!

I am an SAT tutor in Shanghai. Rent is a little expensive here so I kind of live way out in the middle of nowhere. However, there are a lot of little alleyway restaurants where you can get a good meal for under 2 bucks U.S. Last night, I was on my way to such a place when I discovered that Garfield had somehow found his way to my neighborhood, looking sassy as ever. As you can see, he is either coming on to me or he wants to eat me. I guess this is where he goes when he leaves Jon to stew in existential terror.

PS: This Garfield was not hocking any Davis goods or anything even remotely related to Garfield. He was really just chilling outside a cheap, back-alley Chinese food restaurant. I have no idea why he was there. 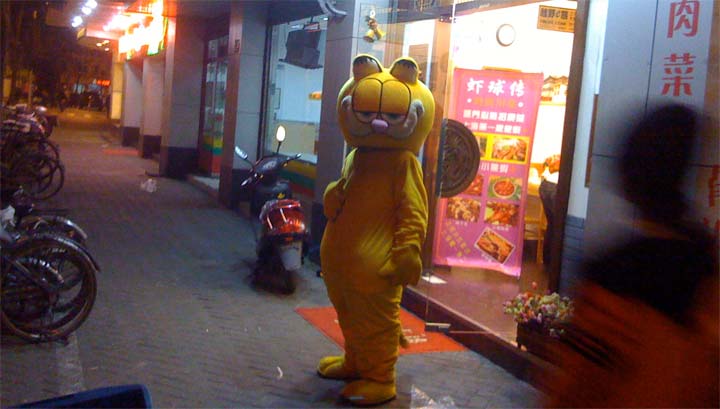 There is something unspeakably creepy about the way Garfield is looking at the camera here. Dave, for not screaming aloud and fleeing in terror into the night, you are to be commended.

And now, it’s time for … your comment of the week!

“TJ’s background is obvious. He was created in a lab using the combined DNA of Arsenio Hall, Liberace, and a Portuguese Water Dog.” –Charlene

“It is a sad, sad criminal conspiracy that can be derailed by a picture on Rusty’s Flickr page. Just turn yourselves in now, boys. There’s no hope.” –Artist formerly known as Ben

“I didn’t realize he had batted the alarm clock; I instead thought he projectile-shat onto the wall. Either way, his dexterity is amazing.” –Al of the Christian Singles Jungle Patrol

“Curtis’s dad’s expression is not one of surprise or amusement. My guess, given the circumstances, is that Curtis’s incessant anti-smoking hounding has finally driven him to replace his instant coffee mix with pure Skoal.” –Dragon of Life

“Wow, you know what I just realized? A picture shows images of things. That could include our faces! And our faces are wanted! Um, is it legal to kill a kid with a camera? Oh, what do I care. I’m a wanted man! I can kill anybody!” –un malpaso

“Jack Elrod is atoning for the chauvinist sins of the last storyline by giving the ladies in the audience what they’ve been clamoring for: a prison-hardened reimagining of My Dinner With Andre. You’re welcome, ladies.” –Joe Blevins

“I am not a pork item in the stimulus package … unless you want me to be. Wink wink. Anyone? Anyone? No? I WILL DO ANYTHING FOR MONEY UP TO AND INCLUDING THAT WHICH IS EXPRESSLY FORBIDDEN BY SEVERAL DIFFERENT LAWS AND RELIGIOUS TEXTS.” –Nate

“Tommie makes her move! Of course, almost any price would be worth it to get rid of that horrible blue, um, sports coat thing from Gary, but I still admire Tommie for being willing to offer her body as a reward for his removing it.” –Master Softheart

“I refuse to believe TJ’s story until he mentions the years as an underage gigolo and the stroke that paralyzed his face. Preferably in the same anecdote.” –150

“I don’t care if TJ’s father was a con, or his mom died. My only question is that grin. I need an origin story on that grin. Did his mother die of Smiley Sardonic Rictusosis? Did his dad go to jail for stealing his son’s lips?” –Spk

“Mark and family are apparently considered the local technology superstars, the Lost Forest version of Steve Jobs if you will, based on the fact that they can be uniquely identified as ‘the folks with the camera.'” –DaveyK

“The Greaser and Workshirt plot could be the beginning of an absurdist parable where the infinitely distracted heroes never arrive at any destination: ‘Workshirt, when we were renting the car to go to Lost Forest, the Avis guy got a good look at us. Better head over there and kidnap him.’ ‘Greaser, that gas station we stopped in on the way to Lost Forest had a security camera; I’m gonna go ask them to sell me the footage.’ ‘Good thinking, Workshirt. Now let’s pull over and ask these innocent bystanders for directions … D’oh! The innocent bystanders made us!’ And so on, an endless Finnegan-Begin Again loop of covered tracks.” –Tim Cavanaugh

“Clint Brawny and Emily Armfull are scions of a paper-towel and baking-soda fortune, respectively. Blondie and Dagwood came up with a plan to seduce them on purpose, because, frankly, there’s nothing more important to either of the Bumsteads than a clean kitchen and an inviting refrigerator.” –BigTed

“Sam, fully aware that this can only end in her turning into another one of the strip’s buxom pinups, oversees the transition with a look of intensest ennui.” –Black Drazon

“I don’t know what this impostor strip is, but it’s not Judge Parker. I know that because there are no scantily clad women, nor men discussing inanely trivial details of their latest lucrative career ventures. We all know those are the only two themes allowed in the Judge Parker strip.” –Alan’s Addiction

“It is a little disconcerting for him to call her ‘Princess’ and her to call him ‘Sam’. Sorta like he’s saying, ‘Let me love you like a father!’ and her reply is ‘Can’t we just be friends?’ Which is odd, because Sam normally doesn’t give a shit about feelings or affection.” –Donald the Anarchist

“Oh sure, you think she’s cute now, when she’s fetching you beer and peanuts with her lowered eyes and her little apron on. But you won’t think so later, when you’re cowering in a hollow tree incubating one giant egg after another for a dozen weeks at a time.” –Joe Btfsplk