This, combined with this, makes me think that we should add “outfits that people wear while cleaning” to “drug paraphernalia” and “men who don’t look like the two or three dudes that every dude in Apartment 3-G looks like” on the list of things for which the Apartment 3-G team could use some reference photos. My alarm bells are pinging, of course, as to why Ruby might be in desperate and immediate need of some industrial-grade solvent. “Hey, look at that lady over there in that vacant lot! It sure looks like she’s burying someone in a shallow grave and then using some sort of potent cleanser to accelerate the corpse’s decay, doesn’t it? But that can’t be right — nobody dressed like a Colonial Williamsburg re-enactor could possibly be involved in anything shady!” 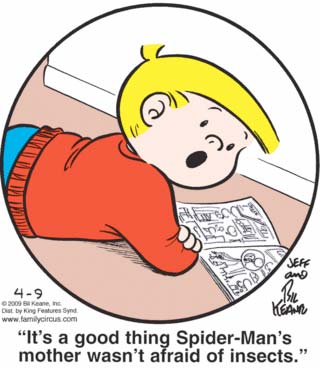 I’m all for Billy rotting his mind with comic books, as he’ll clearly never amount to anything anyway, but can’t we expect him to pay attention to the details? As far as I know, Peter Parker doesn’t even have a mother; he was merely created spontaneously when Aunt May and Uncle Ben came down with nephewism, a common affliction in fictional characters. But maybe I’m being too hard on Billy; his larger point — that it would be amusing to see one of Peter’s loved ones beat him to death with a shoe or a rolled-up newspaper — is one that I can heartily endorse.

Oh, look, I guess I was wrong: it seems that Ted really is a scammer, and now we’re going to get to watch the Spanish Prisoner con in action, for certain limited definitions of “action.” Meanwhile, I’d just like to offer this bit of advice to noir-aspirant villains everywhere: though it is important to keep your victim in your sexual thrall in order to prevent her from thinking too much about the details of your fraudulent scheme, creepily drawing her onto your lap in public and gently caressing her cheek, all the while telling her how much she reminds you of your sister, is not the best way to go about doing that.

There is exactly one character in Shoe at whose antics I laugh in a non-ironic fashion, and that is Buzz, the elderly dyspeptic bird. Today, he’s spent hours wandering around aimlessly, angry and confused, because he’s old and losing his mind! Ha ha! Oh, I’m going to hell.