Sincere thanks to everyone who supported the Pledge Drive — and if the appeal didn’t fit your schedule, budget, or charitable priorities, thank you for your patience. No more fund-raising ’til fall I promise, although “surprise” contributions are always a welcome treat! The button’s at the left under the Comment of the Week there. Just sayin’.

If you missed any of the Pledge Drive banners, they’re at the bottom of this page.

Passive-aggressive zombie Lisa Moore deftly sinks the hook, assuring that the condom will stay in Les’s jacket until he needs to replace the elbow-patches again. (No, he does not keep the condom in his wallet: Lisa’s picture is in that wallet! Duh!)

Personal note: Most of the time, making fun of comics is like plinking cans with a .22 — an idle diversion, not too destructive. An especially irritating strip might make me wish for a slightly higher caliber. But when the Dead Chick shows up in Funky Winkerbean, I start wondering how big a thermonuclear device it would take to blow eastern Ohio to rust and splinters. I suspect this is an overreaction on my part, and I’m working on it. 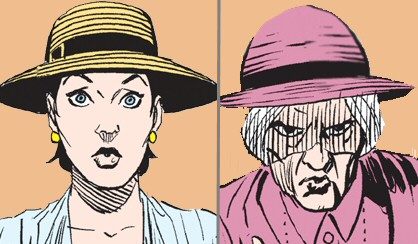 Just as Seinfeld famously expanded the horizons of observational comedy, so Rex Morgan, M.D. opens new vistas for observational drama. Clueless yuppies Rex and June drift along on chitchat and ice cream, vaguely entertained by the epidemics, kidnappings, and murders that backdrop their meaningless lives. Great fortunes are reversed, families ruined, lives lost — none of it touches them.

Until now. In the person of Agnes Dunsmore, June confronts her own gin-soaked, loveless future. Staring through the veil at those fissures and spider-veins as into a mirror, she forms the thought that burns in her eyes, and breathes, “Guido — and now — before it’s too late!”