Let’s start today by taking a step into the past — specifically, yesterday. 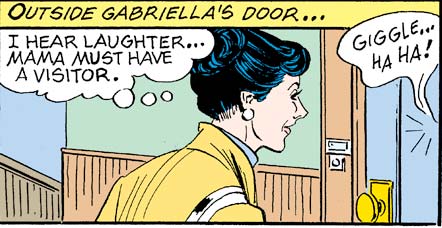 Margo is about to jet off to China to single-handedly rescue her fiance and force the People’s Bank of China to revalue the yuan in the process, but first she’s stopping off at her mother’s for a free meal. What could possibly be the cause of the girlish glee occurring inside Gabriella’s apartment?

OH MY GOD, IT’S HER PARENTS! And they’re being all … nice to each other. Surely the last thing any of us want to see is our parents flirting like they’re on a third date and have consumed exactly the right amount of wine for magic to happen twenty to forty minutes in the future; this is especially true for Margo, whose very self-image requires her to imagine the act of her creation as a moment of pure mutual loathing and contempt, so you can imagine her disgust at seeing this happy little tableau here.

(Margo’s creation story is actually pretty sordid, which gives this whole scene a vibe of genuine ick that I’m not sure is intended.)

As panel three indicates, Blondie is under the suffocating, restrictive gaze of her husband at all times, so she’s learned to choose her words carefully so as to avoid his wrath while still speaking the truth. “I thought he was all those things, but boy howdy was I wrong. Look, Cookie, the results of my carefree flapper days should make it pretty clear that bathtub gin dulls both your eyesight and your judgment.” 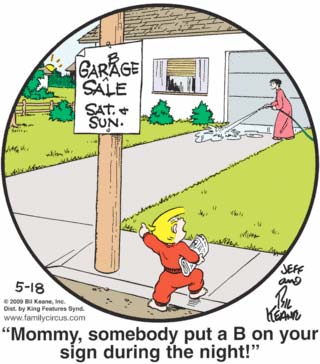 Oh, look, the Keanes have apparently acquired a crazed neighborhood enemy! This can only escalate; tomorrow, they’ll presumably wake up to find the words “HUMAN GARBAGE” spray-painted across the front of their house. The real question, of course, why it took so long for this to happen.

You’re probably laughing at this because you’re imagining Rusty, dressed in his best khaki paramilitary uniform and his brightest blue kerchief, earnestly showing a college admissions officer his “transcripts,” which consist entirely of poorly lit and composed pictures of those forest animals dumb or ill enough to be lured into the pen behind the Trail cabin. But that scenario, of course, assumes that Rusty has any idea what “college” actually is. Once he’s saved up enough, Mark and Cherry will probably find a glove factory or third-world rebel army willing to accept some cash in return for taking the mutant freak-child off their hands; then they’ll tell him he’s going to Bowdoin or something and send him on his way, never to be seen again.