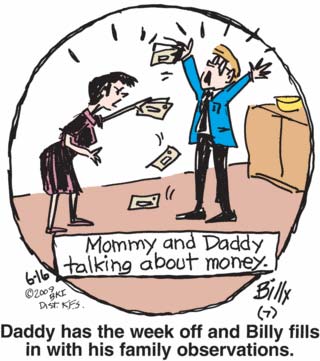 The Family Circus isn’t just a beloved refrigerator decoration for old people everywhere; it’s also an elaborate long-running narrative experiment, challenging our notions of hard and fast divisions between “reality” and “fiction.” The Family Circus family has a very strong resemblance to the real-life family of Bil and Thelma Keane; the parents are modeled very closely on them, and the kids are as well, though not as closely as you might think — there are actually five real-life Keane kids, and the only daughter, whose childhood nickname was Dolly, is in real life older than the Billy analogue, whose real name is Glen. The strip father’s job is also supposed to be a cartoonist; you do see him sometimes working in a home studio, but he also appears to leave for some kind of office job during the day. Then there’s strips like this one, where pretend-Billy takes over for pretend-Daddy in the comics drawing business, which implies that the comic is actually produced by one of its own characters, like a snake vomiting up its own tail, even though the actual end result has traditionally been drawn by real Bil and not real Glen. Add into the madness the fact that for some time the real artist of the strip has been the real Jeff, though there is the fiction (see what I did there?) that Bil is still doing it; real Jeff looks remarkably like pretend-Jeffy and yet seems determined to portray pretend-jeffy as a moron whenever possible.

Try to keep all this in mind and you’ll be left with a serious headache when trying to figure out who might be responsible for today’s panel on the several different layers of fiction, metafiction, and reality that it simultaneously occupies. And that’s too bad, because, when you cut through all that, the content of today’s panel is pretty delightful, containing at is does the pretend-Keane parents (or the pretend-pretened-Keane parents) getting into a screaming fight because LOOK AT ALL THESE FUCKING BILLS and WHY DON’T YOU GET A REAL JOB and MY MOTHER SAID NOT TO MARRY YOU and so on. Of course, the real Keanes never had arguments like this, because of those aforementioned old people and their insatiable lust for Family Circus-branded merchandise. But nobody wants to put a crudely drawn panel of Mommy and Daddy lighting cigars with hundred-dollar bills on their refrigerator.

The punchline of this strip would be kind of cute if Brad did in fact have any other friends, but as it is it’s just kind of depressing.